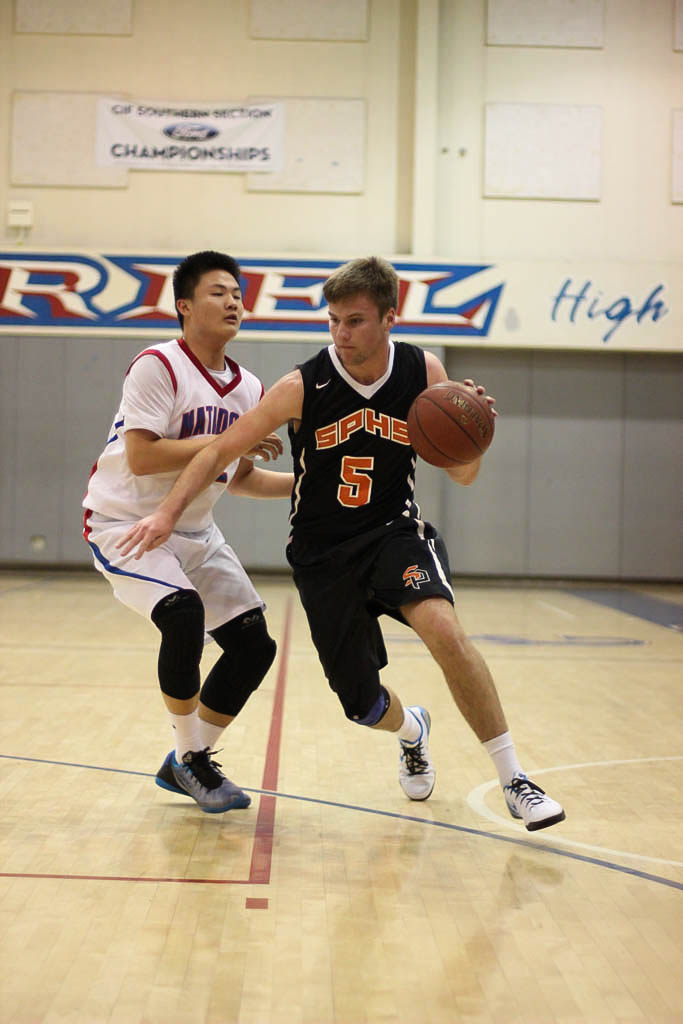 After freshman Jaylen Park made his first home debut in the Tigers Rout of Azusa High School on Wednesday, South Pasadena continued the momentum against San Gabriel High School, leaving the gym with a comfortable 61-41 victory.

The Tigers jumped out to a quick lead in the first quarter and never looked back. Consistent three-point conversions kept the score margin from ever reaching single digits for the rest of the game, as the Tigers shot over fifty percent from outside the arc.

On Wednesday, an all-around team effort helped South Pasadena come out with a satisfying 74-53 victory.

“Logging my first minutes at the home gym definitely felt good,” Park said. “Playing as a teammate alongside great upperclassmen players is truly an honor.”

Junior Raymond Arismendez got his first start and exploded for an impressive 11 points. Arismendez knocked down key three pointers over the course of the game and joined senior co-captains Joey Toyama and Christian Lee in rallying the Tigers past the Aztecs.

“I’m looking toward contributing more to the team, offering all I have for the sport to the team,” Arismendez said. “I hope to develop into a qualified starter from a sixth man off the bench.”

South Pasadena showcased its offensive firepower with a fantastic first quarter, outscoring Azusa 18-10. Tigers carried the momentum and finished the first half with a commanding 34-21 lead by consistently grabbing offensive rebounds for second chance points and forcing turnovers for fast break points.

The Tigers continued its hot streak of making shots inside and outside the arc as the Aztecs could not stop South Pasadena defensively. In the third quarter, the Tigers outplayed the Aztecs 26-16 to establish a comfortable edge heading into crunch time. South Pasadena head coach Dave Lutzeier took all of the starters out throughout the majority of the fourth quarter and played reserve players who managed to prevent Azusa from ever making a comeback.

During the Rio Hondo League regular season, the team hopes that its reserves maintain the same high level of energy that they featured versus Azusa as Lee expressed, “If our bench’s performance during league is just as productive as it was against Azusa, we should be able to finish in first place.”

The next event on the Tigers’ schedule is their Rio Hondo League regular season opener against the Blair Vikings at Blair High School on Wednesday, January 14. South Pasadena looks to improve upon a 6-4 third-place finish in Rio Hondo League from last year, and is confident that the team has built the necessary components to take the league crown from La Cañada Spartans. Blair will come into Wednesday’s game with a 7-9 record overall.