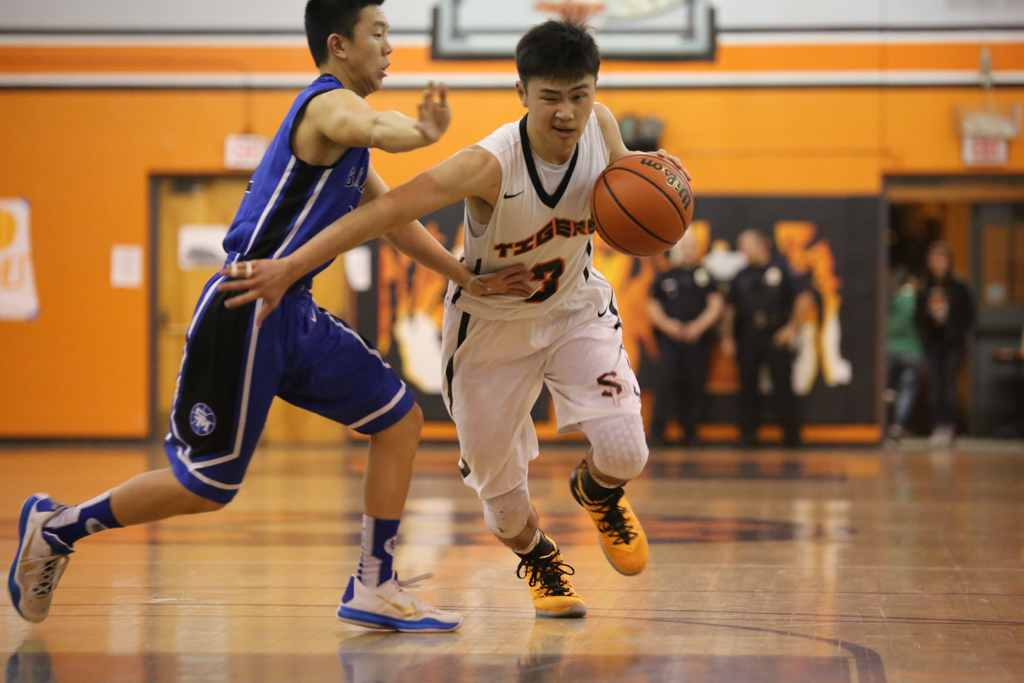 Tension between the two rivals could be felt the entire night. South Pas marked first blood after junior Lucas Fox hit the first three pointer of the game. Both teams displayed lockdown defense in the first quarter as they had trouble making openings on each other’s basket. Despite the intense man-to-man pressure, senior Ray Arismendez tallied up his first three of the night alongside sophomore Jaylen Park sinking a reverse layup for a first quarter score of 8-6 in the Tigers’ favor.

Senior Alex Nakagawa got the crowd on its feet after stealing the ball for a fast break layup to start the second quarter. San Marino answered back with six points of its own to keep the game close at 12-12 until Nakagawa knocked down back-to-back three pointers for a 18-14 lead over the Titans. Junior Matt Scholtz added three points, followed by four more points from Nakagawa to give South Pas all the momentum in the quarter. Nakagawa’s 12 points pushed the Tigers lead to a score of 27-18 ending the second quarter.

The Tigers showed no signs of slowing down in their offensive game after halftime. Nakagawa returned back to the court red hot with a corner three pointer to keep the Titans behind, only to be answered by San Marino sinking a three pointer of its own to rally its student section. This was quickly silenced after Fox put up a two point jumper just before the shot clock ended, followed by five more points from the Tigers to increase the lead to 14 for South Pas. Junior Stone Franco recovered his own shot after missing to set up Scholtz for a layup to end the third quarter up with a sizable count of 41-29 against the Titans.

The Tigers’ hot shooting in the fourth quarter extended the lead to a 10 plus deficit for San Marino, forcing the Titans to foul and stop the clock. Titan guard Austin Lee put up eight points in the last minute of the game but fell short by a three point deficit to cap off the game with a final score of 60-57.

“It felt great,” Franco said. “We’ve been busting our butts in practice and have been getting on each other to get better [and] all we can do from here is keep looking forward and not stop.”
The Tigers’ next matchup is  against Blair High School away on Wednesday, February 3.