Top Posts
Teachers voice concern over adopted learning models
Community may get a chance to vote on...
SPUSD outlines plans for distance learning during the...
Anti-Zionism cannot be equated with anti-Semitism
Anything goes?
L.A. complies with statewide protections and improvements for...
LARPing: an activity to experience the game beyond...
Residents voice encounters with the SPPD at virtual...
Why affirmative action is necessary
CIF announces athletic calendar for 2020-2021 school year
Home Boys Basketball Boys’ basketball falters versus Blair
Boys BasketballFeaturedSportsWeb Exclusive 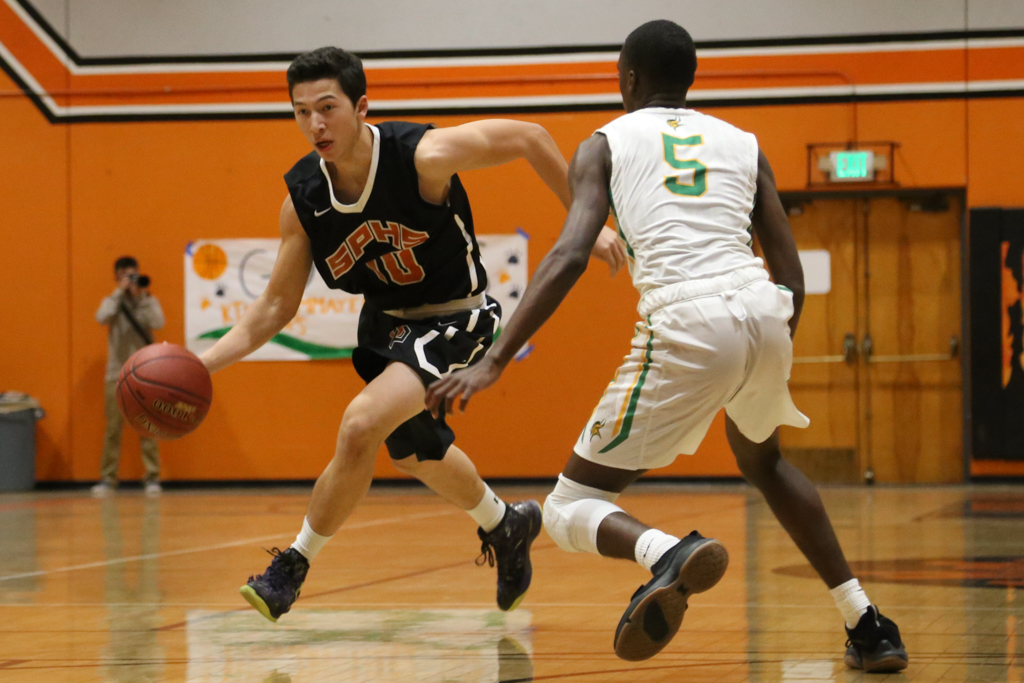 Senior Ben Kent makes an aggressive move to get past his defender.

A strong comeback proved futile in the final moments of boys’ basketball’s 65-61 defeat to Blair on Wednesday, January 24. The Vikings’ incredible combination of length, speed, and athleticism overwhelmed the Tigers early on, but South Pas retaliated in brilliant fashion.  Unfortunately, Blair knocked down key shots in the final seconds,  thwarting any remnants of a South Pas resurgence.  The loss decreases the Tigers’ overall and league records to 10-12 and 2-3, respectively.

From the opening tip-off, it was clear that Blair possessed an unrivaled mix of length and athleticism – and that they knew it. Flying around the court, the Vikings looked to anticipate and cut off passes, and subsequently rack up buckets in a nearly unstoppable transition attack. While this defensive mentality bears resemblance to the South Pas zone package, the Vikings and Tigers utilize contrasting strategies on offense: Blair scored most of their points in the paint; South Pas’ attacking foundation lies around the arc. In the first quarter, the Vikings used these aggressive methods to build an early 13-5 lead, thanks in part to missed chances by the Tigers. South Pas battled back in the latter half of the eight-minute period, limiting the Blair lead to 15-10 before the close of the quarter.

South Pas adapted to Blair’s backcourt pressure in the second quarter, but its shooting struggles persisted. The Tigers consistently settled for mid-range and long-range jumpers which they frequently missed, while the Vikings drove to the rim time and time again. Eventually, SPHS coach Ryan Lee called a timeout with 4:27 remaining, sensing his team was on a downhill path with a 31-15 tally illuminated on the scoreboard. Following the timeout, the Tigers were unable to build momentum off of senior Nick Corvino’s threes, as several turnovers reduced the number of quality offensive possessions. However, Corvino’s prowess sustained South Pas’s  hope for a victory; the premier guard added a layup off a brilliant half-court feed from senior Jaylen Park, then showcased his acrobatic rebounding abilities to bank the ball off the glass and cap off his ten-point second quarter. The first half finalized with a 37-24 score. 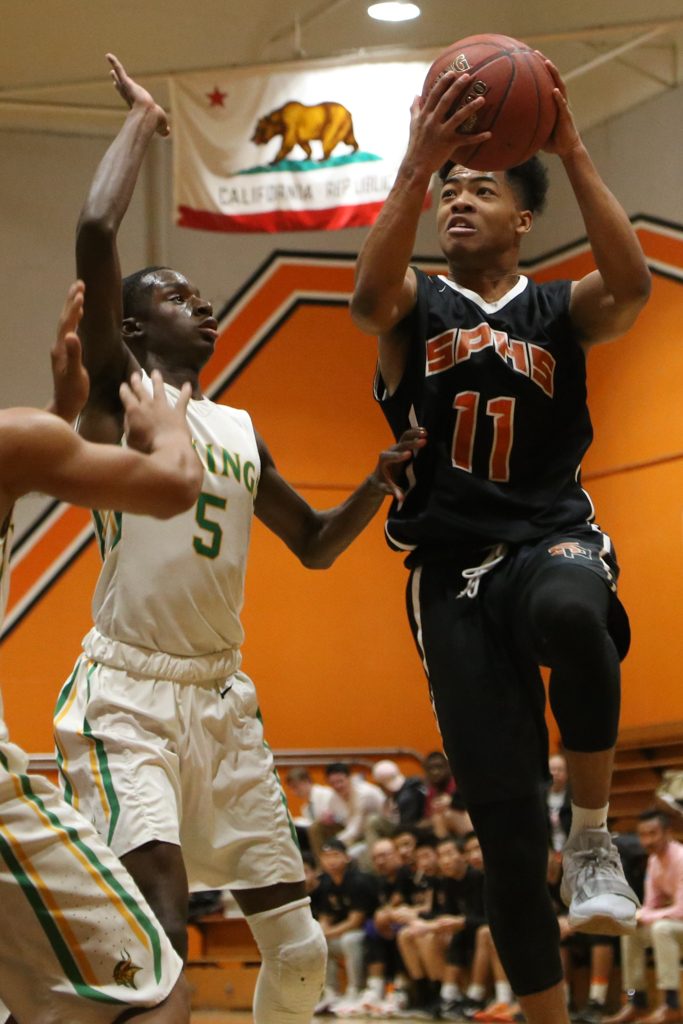 The Tigers entered the court in the second half with a renewed sense of urgency, exemplified by their sensational zone defense. As the Tigers worked as a cohesive unit to clog lanes and suffocate driving Vikings, Blair grew flustered, unable to convert in the paint, and South Pas capitalized. Park nailed a corner three in the starting moments, and Corvino pulled up before swishing a mid-range shot on the following possession. Corvino and Park added an additional deuce and triple, respectively, igniting the previously dormant South Pas audience and bringing the score to 39-34. Blair and South Pas exchanged opportunities, with several Tigers adding to their stat lines and Blair capitalizing in transition and knocking down free throws.  The Vikings retained more control as the quarter progressed, eventually re-establishing a 12 point lead (57-45) before the third period ended.

South Pas started the fourth quarter as it had the third; junior Sebastian Au-Rivera drove to the rim and finished and Corvino swished a three. The physicality intensified, with several no-calls on tough plays in the South Pas frontcourt and a myriad of controversial blocking fouls assigned to Tigers. Corvino quietly exited with an injury, and sophomore Alan Quan stepped in, drilling a clutch three to decrease the deficit to 4. Au-Rivera nailed another triple, rousing the crowd and nearly eliminating the Blair advantage. A Viking turnover provided an opening for the Tigers to gain a lead, but that chance was quickly squandered. Moments later, a collision was called a blocking foul, but the entire South Pas crowd cheered, believing the wrongdoing had been committed by a Viking. An officiating timeout led to discussions with both teams, and a double foul was the ultimate call. Consequently, Blair held possession and a 62-58 lead before Corvino re-entered and knocked down a three of unparalleled significance. With less than 60 seconds left, Blair resorted to its bread and butter play, driving and finishing at the rim to gain a 64-61 lead. A South Pas turnover on the ensuing inbounds play returned possession to the Vikings, who drilled a free throw to put the game out of reach with the 65-61 score.

Concussions: the cost of competition article

You won’t be sorry at Sari Sari