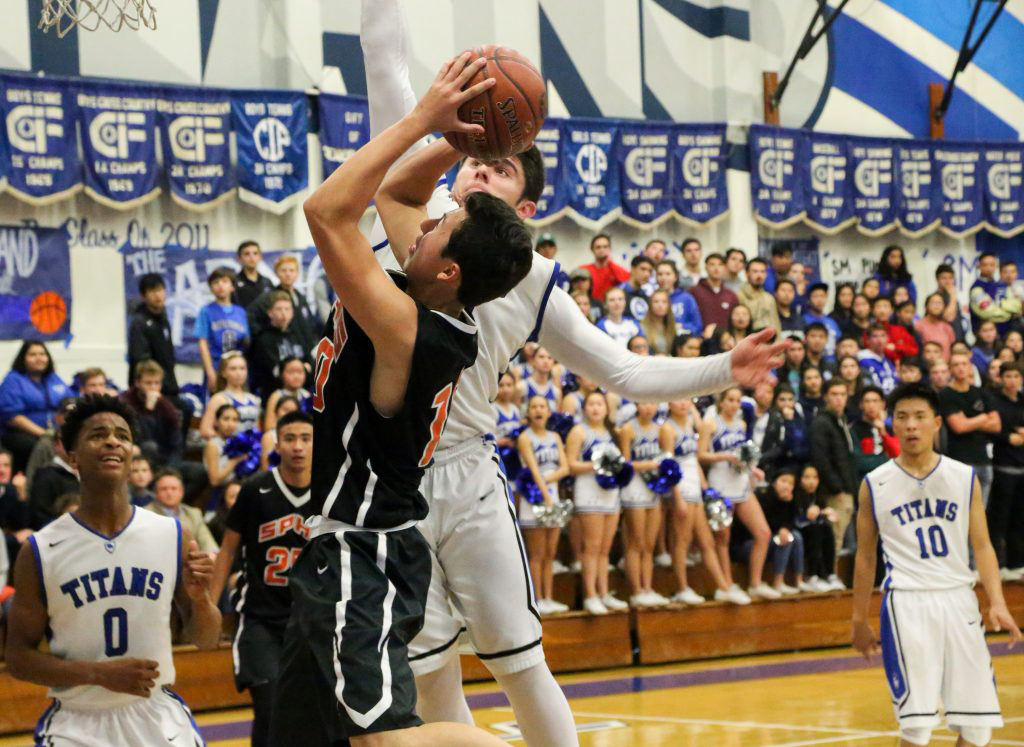 Senior Ben Kent drives in the paint against a blocking San Marino defender. South Pasadena's loss opens its league record at 0-1. South Pasadena is now 1-1 against the Titans on the season, with one final match up against San Marino left on the schedule.

Boys’ basketball ended their three-game winning streak with a 73-62 loss to San Marino on Wednesday, January 10, in a roller coaster of a matchup. Fervent emotions characterized the defeat, as fans on both sides were quick to acclaim impressive plays or criticize lackluster efforts. The Tigers and Titans traded flashes of brilliance, with each team building and maintaining momentum for lengthy periods of time. Unfortunately, San Marino emerged victorious, taking control from the opening whistle in the fourth quarter and never letting go. 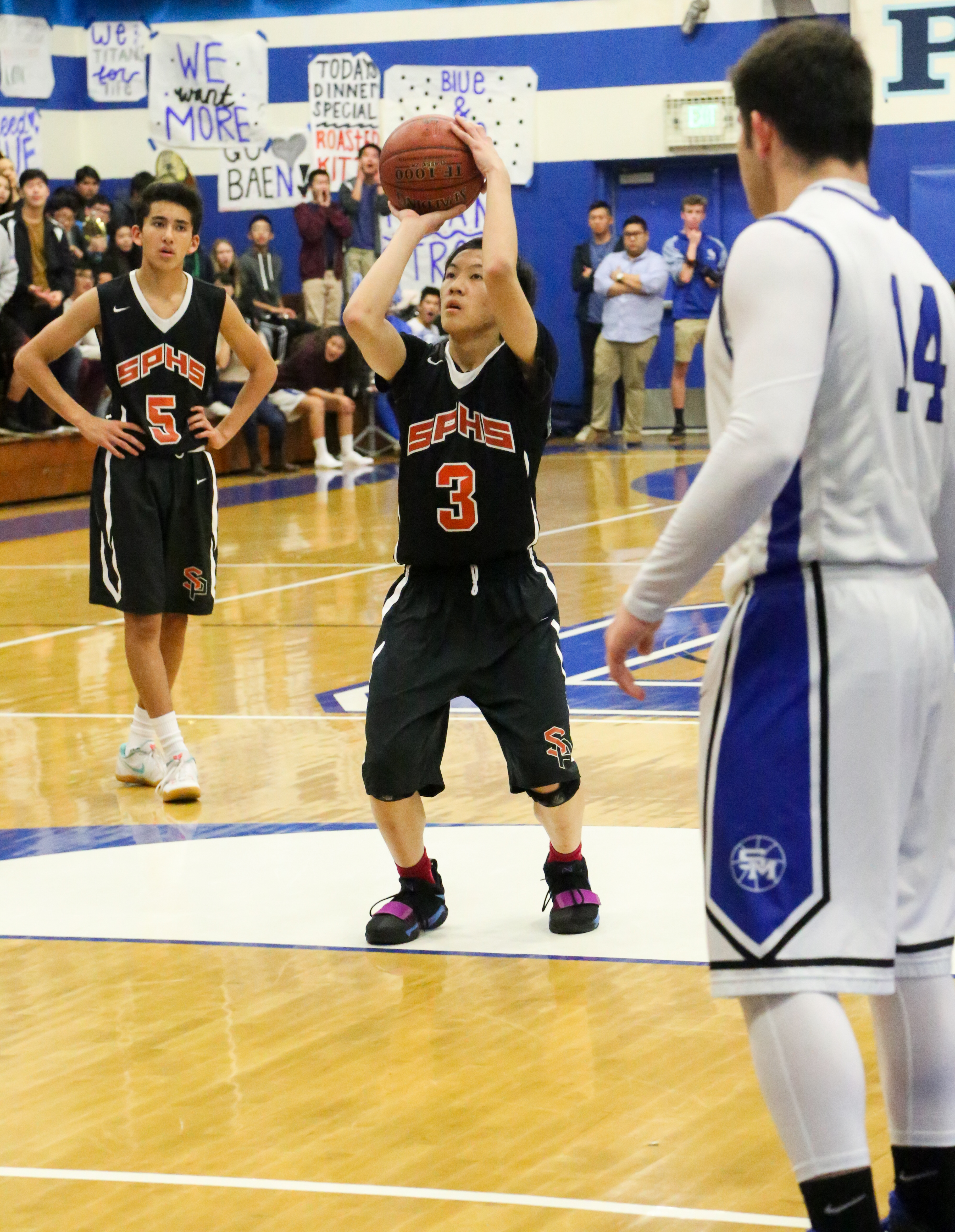 Senior Nick Corvino showcased his accuracy from deep early in the first period, knocking down a three and a deuce to cut the Titans’ lead to 7-5. San Marino utilized their size advantage to attack the basket on offense, overwhelming South Pas in the paint. Using zone coverage, the Titans prevented the Tigers from gaining open looks on the perimeter and were subsequently able to build a 14-6 advantage. South Pas needed to match San Marino’s physicality and penetrate the center of the court to create quality shot opportunities. Sensing confidence growing for the Titans, coach Ryan Lee opted for a smaller, quicker lineup and a zone defense, which allowed the Tigers to use quickness to force errant passes, turnovers, and steals.  From defensive success, South Pas was able to turn the tide of the game and build momentum that would continue in the second period. Juniors Matthew Mayemura, Kai Jones, and Sebastian Au-Rivera drilled threes to start off the second quarter, stripping San Marino of their lead and providing the Tigers with a 22-16 advantage.  South Pas fans were on their feet, loudly cheering the Tigers’ 16-2 run as San Marino players and fans grew flustered on the court and in the bleachers.  As the Titans battled back and tied the game at 22, the physicality increased rapidly: the officials called a controversial foul on Corvino during an intense play for a rebound but failed to make the same call following a full shove on senior Jaylen Park. An abundance of fouls and free throws brought the score to 28 before Park knocked down an incredible three and the Titans responded with a solid three-point play. The heated first half ended with a 31-31 tally. 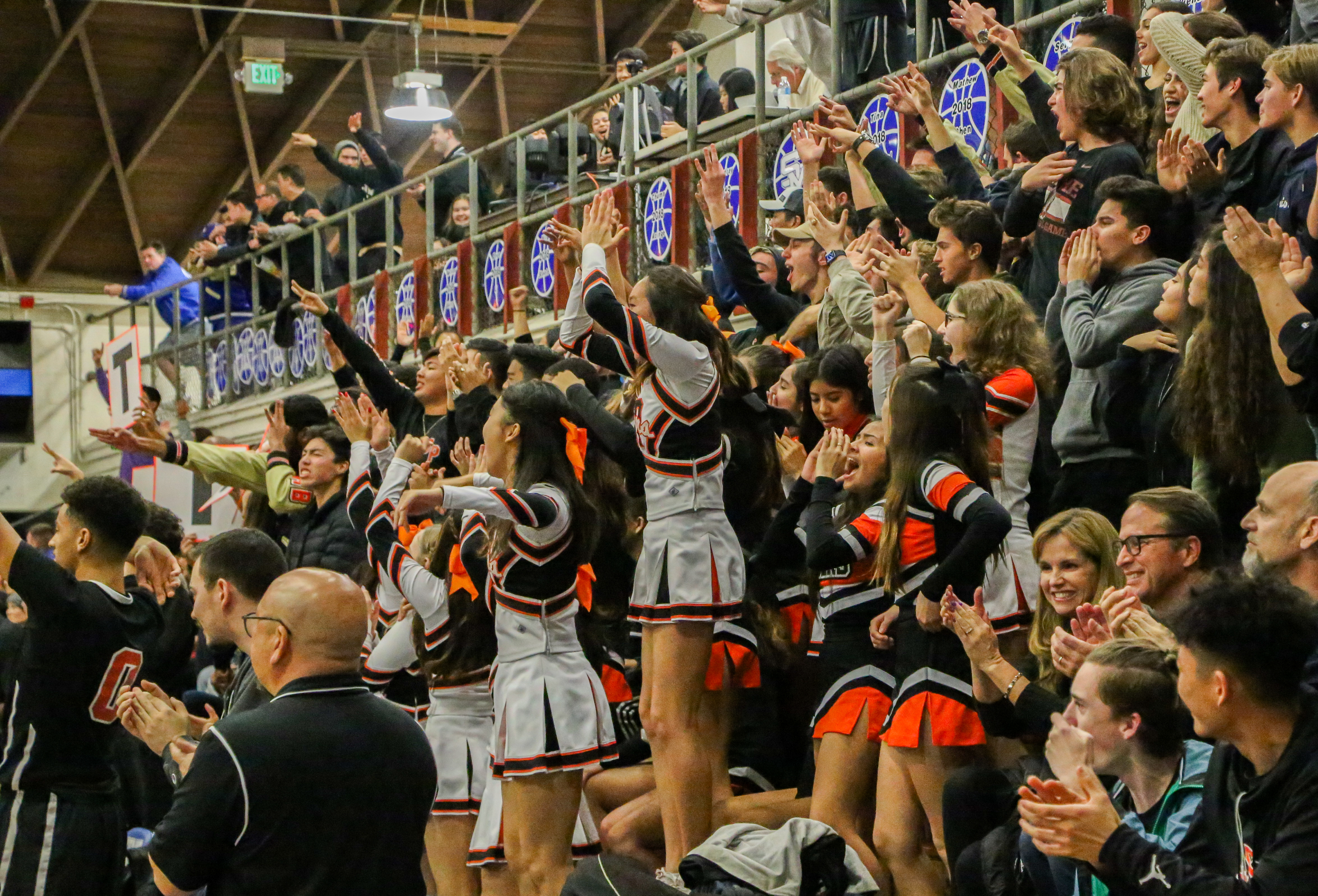 An impressive basket by South Pasadena gets the crowd on their feet as South Pasadena struggled for leverage in the third quarter. Despite a tight match through three quarters, South Pas was unable to maintain its offense in the fourth quarter, against an increasingly tough Titan defense.

South Pas came out balling in the second half, as senior center Reno Goudeau swished a short hook, Park added a steal and layup, and senior Danny Rios drilled a three-pointer to help the Tigers establish an early 38-31 lead. Another extremely controversial flagrant foul was given to Corvino moments later; the senior captain physically broke up a layup and the referee’s explanation was likely that instead of going upwards to play the ball, Corvino took a more horizontal path and got more man than ball. Nevertheless, it was a controversial call, and the foul deprived South Pas of its premier offensive weapon for a significant portion of the game. Later, a series of steals and turnovers had several players on the ground as each team attempted to gain possession and finish off the play. The Titans came out on top, hitting a three from the top of the key and gaining a 42-40 lead. San Marino continued its surge, totaling 16 unanswered points before the Tigers responded with a Mayemura three-pointer and a deuce. The third quarter ended with the Titans holding a 49-45 advantage.

A turnover in the opening seconds of the final quarter extended San Marino’s lead, before Park shrugged off a Titan defender and senior Ben Kent banked the ball off the glass to bring the score to 51-50. From that point onward, San Marino attacked with renewed energy, using a fast pace and their size advantage to cancel out any South Pas basket and grab a 66-55 lead. It certainly didn’t help the Tigers that the San Marino coach practically inserted himself into the play, whether it be shouting instructions or demanding an explanation. With the Titans at a 10-point advantage and just over a minute remaining, the Tigers reverted to fouling to stop the clock and mount a comeback. Unfortunately, it was too little too late, and the game concluded with a 73-62 score.

With the South Pas-San Marino rivalry even at one game apiece, boys’ basketball will face Monrovia on Friday, January 10, at home at 7:00.