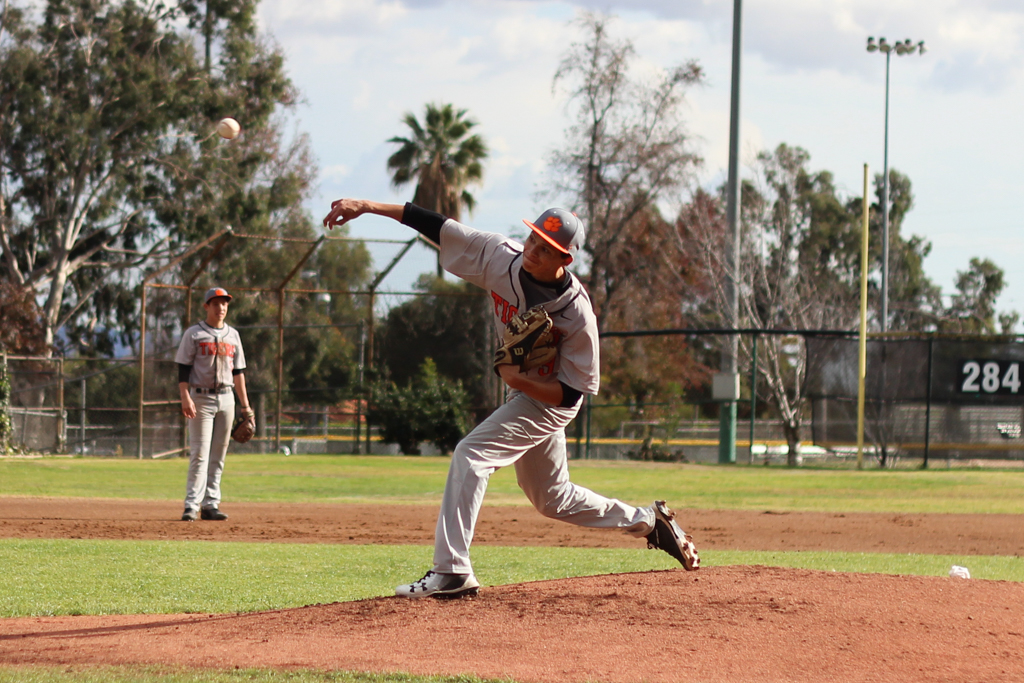 The SPHS Varsity Baseball team netted its first victory of the year in a home game against Salesian on Thursday, March 1st. The 2-0 win, part of the Dave Moore Tournament, was an inspiring change of pace after two losses in the past week; South Pasadena’s record now sits at 1-2 in preseason.

In the beginning, the Mustangs’ had runners on early, but were met with aggressive defense by the Tigers. After a walk, stolen base, single, and another walk during the top of the second inning, Salesian was able to load the bases. A potential disaster was averted by senior Zach Howorth’s timely catch, which prevented multiple runs by providing the third out. The top of the third inning was sealed by three consecutive outs, ending with an outstanding catch at the far edge of center field by senior outfielder Sydney Luna.

As the game progressed, the Tigers kept up their consistent defense. To counter the Mustangs’ two runners on first and second base, a clean double play between seniors Jackson Totleben, Isaac Luevano, and Matt Walker closed out the top of the fourth.

Hoping to improve their lackluster offense in the first three innings, the Tigers took bold strides in the bottom of the fourth with two singles and two steals, yet still failed to score.

Throughout the game, pitchers Totleben and junior Noah Parker (who switched in during the sixth) kept the Mustangs’ batters at bay, dishing out three strikeouts against Salesian and causing numerous fly balls.

Salesian nearly knocked in a run in the top of the fifth, but an out on first base kept the game scoreless. The stage was set for the Tigers to assert their dominance on attack. In the bottom of the inning, Luevano bunted for a base hit, then stole second. A single by Jacob Barnes advanced Luevano to third. Then, Luevano daringly stole home, giving South Pasadena a 1-0 lead.

During the Tigers’ final at bats, Sydney Luna starred as the principle runner. After hitting a single, moving to second, and stealing third, a bunt by Fonseca brought Luna home, and a second run along with him. The trend of strong defense persisted into the top of the seventh, and the game ended with a fly out caught by Howorth.

South Pasadena will match up against the Cathedral Phantoms in another home tournament game on Saturday, March 3.