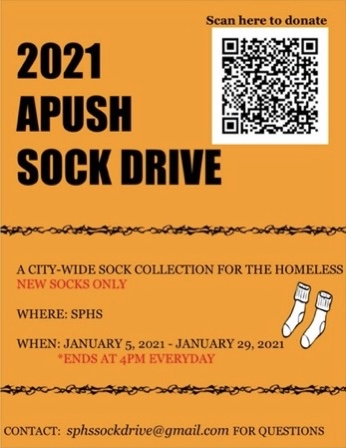 All donated socks and monetary contributions will go to unhoused people on Skid Row.

The annual SPHS student-run sock drive and fundraiser for people experiencing homelessness began on Tuesday, Jan. 5 and will continue through Friday, Jan. 29. South Pasadena community members can place new pairs of socks into the designated bag at the front office on Fremont Avenue or donate money via the fundraiser’s GoFundMe page. Administers of the sock drive stop collecting donations at 4:00 p.m. each day.

The donations will go to unsheltered people living on Skid Row to help them endure the cold weather. Former SPHS teacher Ruth Moonesinghe founded the cause in 2014, and she and her AP Calculus students ran the drive until her retirement in November 2019. Teacher Oliver Valcorza and his AP U.S. History students took over the program and they hope to top last year’s total of 655 pairs of socks.

The group felt that with the coronavirus pandemic acutely impacting unhoused community members, the sock drive was especially needed this year.

“At first we didn’t know if we wanted to have [the sock drive] because donations would be hard to get,” drive leader Nikita Mankad said. “But, we decided it was probably more important than ever to get socks because these are such hard times. Financially, the homeless population can’t afford them, and a lot of the shelters downtown which we donate to have already been low on volunteers.”

Once the fundraiser concludes on Jan. 29, the sock drive administrative team will donate the socks to a homeless shelter operating on Skid Row.

The learning styles conundrum: What is the...