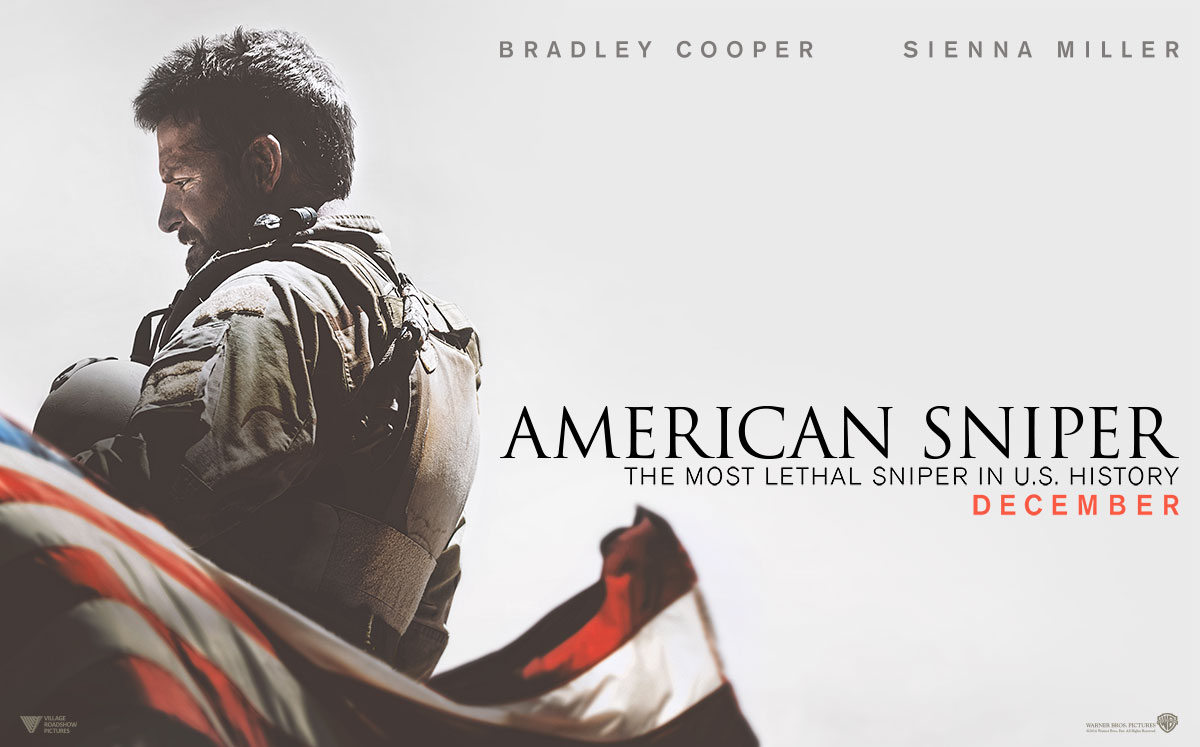 No Oscar season would be complete without the inclusion of at least one war film. This year, to both the disappointment and delight of audiences, that film is Clint Eastwood’s American Sniper.  While the movie achieves occasional excellence, its overall story is lackluster and sticks too closely to convention.

American Sniper details the four tours of duty of Chris Kyle (Bradley Cooper), a wannabe-cowboy who joins the US Navy SEALs. Soon after finishing his rigorous training, Kyle meets and marries Taya (Sienna Miller), but is warned of his imminent deployment to Iraq during the wedding. While serving in Iraq, Kyle earns the reputation of “Legend” for his dead-eye accuracy and dedication to saving others. During one mission, Kyle interrogates a Muslim Sheikh, who reveals intelligence regarding an al-Qaeda insurgent known as the “Butcher,” in exchange for the promise of $100,000. When Kyle and the marines return to deliver the funds, they discover that the Butcher has caught wind of the treachery, and is coming to exact revenge.

Nothing within American Sniper’s overall story arc is particularly innovative. The film only stands out in a handful of short scenes, in which Kyle must make morally compromising decisions while looking down the barrel of his rifle.  One such scene has a boy, no older than ten, tentatively pick up a dropped rocket-propelled grenade and aim it towards a Humvee full of soldiers. Kyle must then make his decision: does he shoot the child, or hope that in the intermittent seconds, the boy will drop the weapon? This scene in particular is incredibly tense and very well done, but most of the film is not dominated by such moments. In fact, for a film called American Sniper, a conspicuous amount of the runtime is dedicated to activities other than sniping.  Although such activities are needed to move the plot forward, they become tedious, especially in comparison to the excitement of Kyle’s sniping conflicts.

Despite the lackluster story, Chris Kyle succeeds as a character, a triumph in which Bradley Cooper is instrumental. Cooper portrays Kyle as a soldier who is not a stoic war machine, but a human, who must make difficult choices and live with the consequences. Ironically, Kyle’s most humanizing facets come forth when he has a gun in his arms and must decide whether or not to pull the trigger. The tension in these scenes is largely attributable to Cooper’s ability to showcase the subtle emotion of stress. Eastwood also deserves commendation for these successes, which lend credit to his directorial ability.

American Sniper is a cut above other recent war films, but brings nothing new to the screen. It does achieve exceptional depth in a number of isolated scenes, and Bradley Cooper’s acting is impressive. However, for the most part, the film does not maintain this momentum throughout its runtime. Ultimately, American Sniper is worth the watch, but not destined for fame in the halls of war-film greatness.