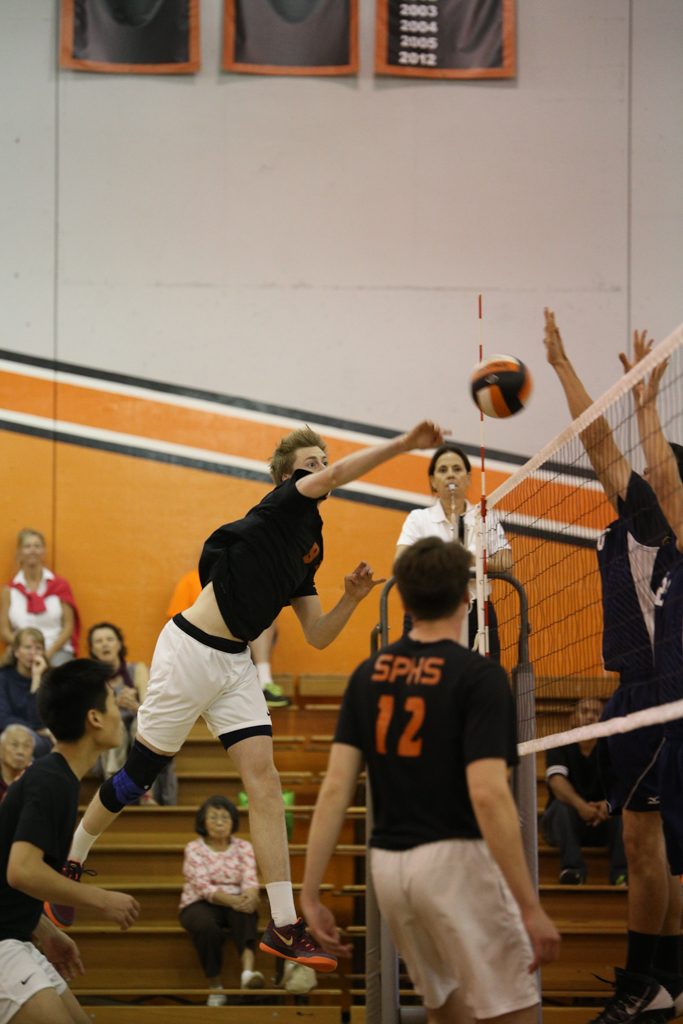 The boys’ varsity volleyball team maneuvered its way to another three straight set wins for a sweeping victory in the home league match up against the Gabrielino Bald Eagles. The Tigers are now 19-1-1 in their overall record and are still undefeated in league standings with 4-0 after beating the Bald Eagles 25-22, 25-18, and 28-26. Senior Richard Yu, arguably the best player on the Tiger team, experienced limited minutes due to personal reasons, but the powerful South Pasadena squad once again was able to pull through with a victory.

South Pasadena could not take control of the game and let the visiting team take an unexpected 5-1 lead in the beginning of the opening set. Outside hitters of the home team made numerous hitting errors to give the Bald Eagles easy points all the way until 9-12. The Tigers, however, found their rhythm on offense behind juniors Greg Luck and Max Luck who finished the game with 19 and 9 kills, respectively.  The Tigers tied the game at 13-13. From there, both teams kept trading points until 18-18 when the first set appeared to be up for grabs by either squad. Tiger coach Benjamin Diaz called timeout right at that point to advise his players’ game plan down the stretch. South Pas then calmly played its game to establish a slight two point edge after the break. Although the Bald Eagles fired right back with a flashy kill, junior Matthew Ng completed a crucial kill himself to  give the Tigers a clear advantage at 23-21. Then, Gabrielino lost its poise and made two straight errors in blocking and hitting to hand the Tigers a 25-22 victory.

Returning from considerably a sloppy set, the Tigers were ready not to repeat the same mistakes during the second set. South Pas made an instant 16-9 run to the midway point of the set with strong defensive mentality under the leadership of senior Aydin Pasebani and junior Scott Kawakami, forcing a Gabrielino timeout. From there, the Tigers did not rush their plays to reduce as many errors as possible especially in hitting. Such effort paid off when both teams traded an equal nine points all the way until the end of the set with the Tigers winning 25-18.

The Tigers seemed to start out the third set with the same low level of energy apparent in the opening period. South Pas once again allowed Gabrielino to build confidence down the stretch as the Bald Eagles saw themselves up 8-11 from improved offensive outing to penetrate the Tiger defense. Such trend continued to 13-18 in which the Tigers saw an even larger deficit on the scoreboard. South Pas then turned on its full focus to make a comeback 5-0 run to tie things up at 18-18 from intense blocking on the Bald Eagles’ numerous kill attempts. As the third set approached crunch time, both teams showcased an extremely even match up with increased intensity, countering each other’s points past the 25 point mark to extend the set. South Pas underwent two risks of dropping the set as the Bald Eagles went up 25-24 and 26-25 and looked to finish the set to force a fourth period. Without panicking, however, the boys were able to pull through in the clutch, scoring three straight to win by two 28-26 to complete the sweep.

“We were not used to the sudden change in rotation as Richard was not playing in the first two sets,” Ng said. “Sloppiness may have been the case in our initial play; however, we learned to bounce back and play up to our true potential.”

The boys hope to continue their hot winning streak next Tuesday with a victory over the La Canada Spartans in another home league match up. South Pas will surge to impressive 20-1-1 overall record and 5-0 league record with the win.