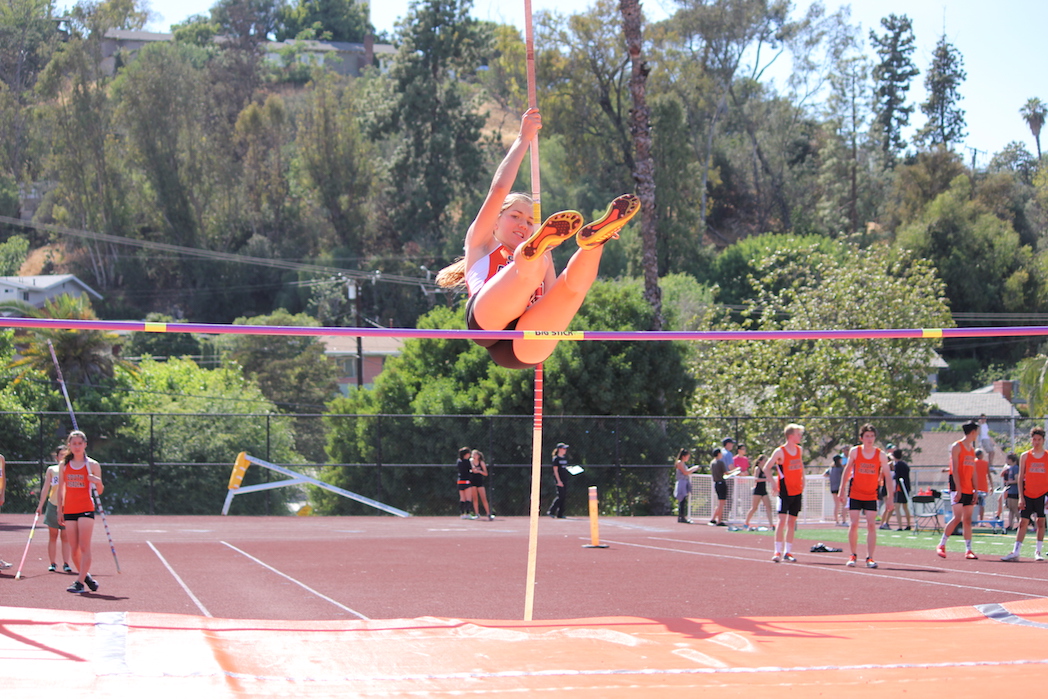 The South Pasadena track teams claimed the Rio Hondo League title in their last meet against Temple City this Thursday, April 30th. The Tigers swept both divisions, with boys winning 82-25 and girls dominating 105-18.

The meet went pretty well, which is what we expected,” senior Kevin Yonami said. “We swept Temple City in pretty much every event, so we really showcased some of our strongest athletes.”

South Pasadena started the meet off strong with the 4×100 meter relays, won by both varsity teams. This was followed by the mile, which was won by senior Cullen Irvine for the boys and junior Maaike Wielenga for the girls. Irvine claimed first again in the two mile, closely followed by sophomore Kieran Press-Reynolds.

The Tigers were dominant in the hurdles as well, with highlight performances from Senior Nina Acebo and sophomore Kate Kutzer, who gained first and second in the 100 meter hurdles. Junior Esteban Suarez won the boys 300 meter hurdles with a new personal record.

The Tigers also shone in field events, thoroughly defeating the Rams. Suarez broke the school pole vault record of 14 feet 6 inches with a mark of 14 feet 7 inches, after a season of close attempts. He vaulted again at 15 feet, but narrowly missed the height by hitting the bar on the way down. Senior Ryan Ong won the triple jump with a personal record of 40 feet 11 inches, followed by senior Patrick Nelson with 40 feet 2 inches. Nelson also placed first in the long jump with a jump of 20 feet 1.5 inches.

“I think this meet really represents how we’ve been doing in league,” freshman Cate Gladding said. “We’ve been doing really well in overall- all four of our teams are undefeated in season- and so I think we are in a really good place for league finals and CIF.”

The Tigers have league prelims next Tuesday, May 5, and then finals on Friday, May 8. Both are at 3:30 p.m. on the home field.