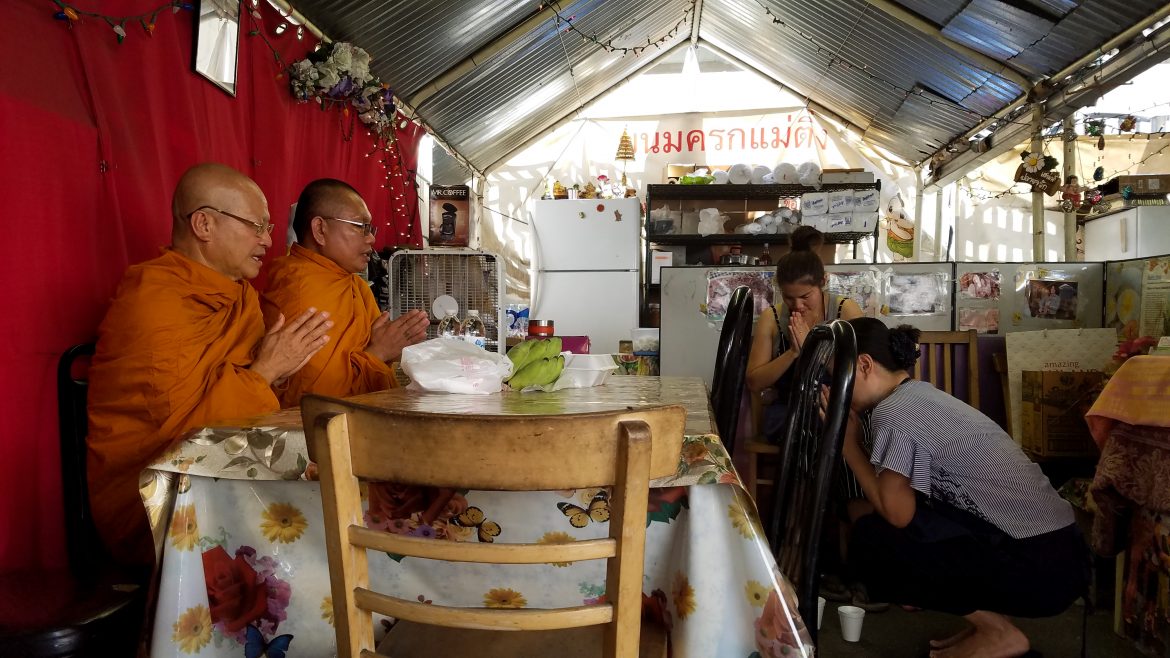 Two monks and their servers sit in prayer before enjoying a delicious meal at Mae-ting's Coconut Cakes.

Summer breaks have always allowed me to experience various cultures in other cities, ranging from bustling New York to the calming, tall redwoods of Yosemite. Despite my travels throughout America, I remained unfamiliar with the plethora of cultures within Los Angeles that provide the city with its sense of eccentricity. I set out to Mae-ting’s Coconut Cakes and the LAX-C Thai Market to experience the customs of peoples who have arrived in Southern California over the last few decades.

My group met at the Gold Line Metro Station for a quick and (thankfully) air-conditioned train ride to Chinatown. We walked over uneven gray concrete and broken glass for two blocks before proceeding through the black iron fence into the area where the market and several restaurants were located. Mae-ting’s would have been hard to find behind the lines of cars if Finley hadn’t been an experienced customer. Upon entry, we were greeted with warm smiles from the employees. Christmas lights and floral tablecloths gave the tented restaurant a sense of homeyness, while the unsuspecting linens around the kitchen manifested its authenticity.

Just as the restaurant was small and unpretentious, the food was unique and delectable. We ordered e-saan, a sausage on a stick with a sour flavor; a papaya salad, which fooled me with its sweet taste before the spice kicked in; and pork and chicken skewers, which were tender and delicious. Although all these dishes were fantastic, the star of our meal were the coconut cakes. Crisp on the exterior but soft and sugary on the inside, the miniature hot cakes melted in our mouths. Although many of my friends can testify that I dislike – even loathe – coconut, the deliciousness of these cakes would’ve had me eating them by the handful if I didn’t have to share.

Next, we ventured to the Thai supermarket. At first glance it was strikingly similar to Costco, with packaged products exposed on tiered levels rising up to the ceiling. We wandered through the large emporium, which sold objects ranging from mini-convection ovens to large gongs to unnecessarily substantial containers of Sriracha. Finley compared the creaking forklifts zig-zagging their way through the aisles to the hunting Grievers in The Maze Runner.

Staff Writers Finley Mullen and Sofie Dreskin wander through the aisles of the LAX-C Thai Market.

As I exited the parking lot, I left with a new appreciation and understanding of the everyday life of others. LAX-C Thai Market was remarkable in its variety and provided an interesting look into the organization of different cultures while Mae-ting’s demonstrated how the products in the supermarket make their way from shelf to plate with the one-of-a-kind restaurant serving mouthwatering dishes.

‘Sonic the Hedgehog’ is unable to speed...

Mr. G: Unraveling the enigma under the...