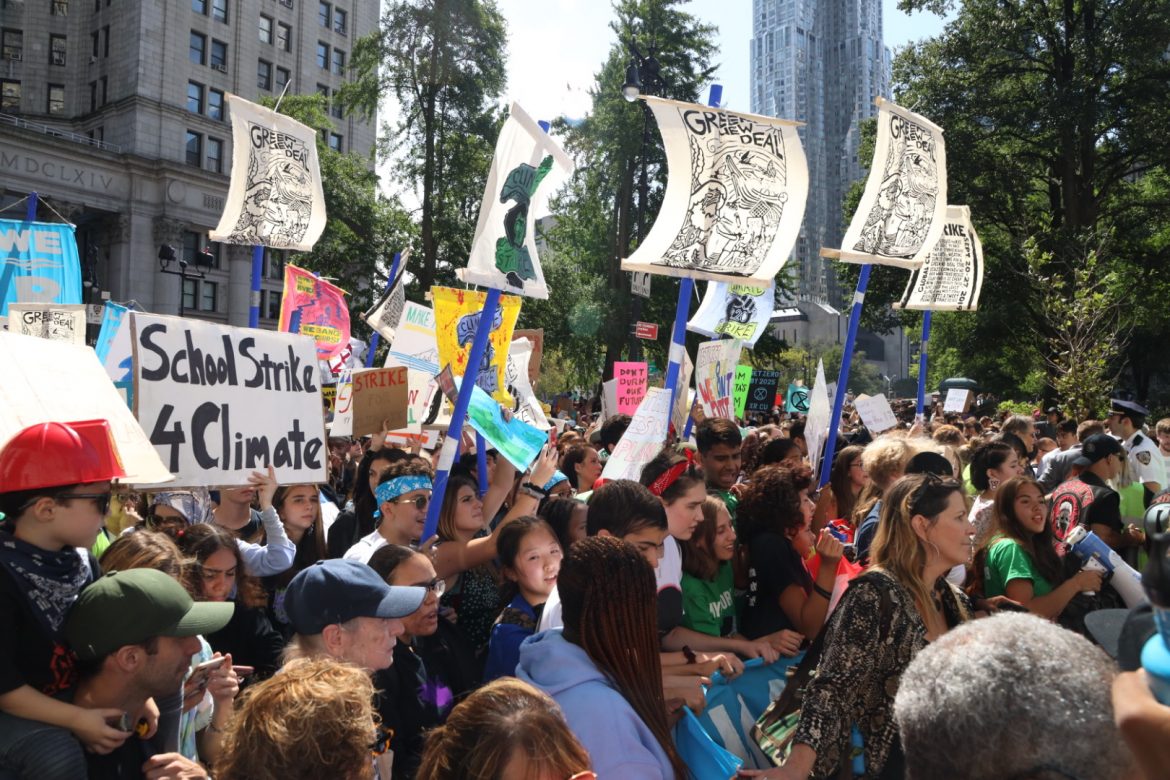 In September 2019, thousands of student activists and climate change advocates packed the streets of New York, Los Angeles, and other major cities in the United States to protest current climate change policies.

I stared down Chambers Street, fronted by the majestic Municipal Building. Ground zero for politics and policy in Manhattan was at the head of the march, which I found rather fitting. Protestors, mostly students, flooded the streets, filling every bit of space available. As I surveyed the teeming mass of climate strikers, the irony that I’m missing my AP Environmental Science test to go to this march did not escape me.

I decided to travel alone to New York City for this Climate March because I wanted to be present for a turning point in history: the largest projected climate march of all time. Going to school seems pointless when the planet I’m attempting to build my future on may not be sustainable. The climate crisis is more important than a few days of school.

This unifying sentiment pervaded the march, which began at Foley Square in lower Manhattan and stretched roughly 20 blocks to Battery Park at the southernmost tip of Manhattan. The entire strike was organized and led by Fridays for Future, an international student-led group that encourages young adults to take part in school strikes and demonstrations to raise awareness and demand action against climate change.

I applied for a press pass a week before the march without expectation of a response, given that I am from a small local publication. To my surprise, the night before the march, I got an email with all the information about the march, a media pack, and instructions for picking up my press pass. I retrieved my pass at Foley and looked for a way to bide my time until the rally began. To manage my crowd anxiety stemming from the assembly of protestors, I went to get coffee and breakfast at a nearby coffee shop.

During the march, workers stared down from their elevated office windows at a crowd that was enormous even by New York standards. Others had climbed out onto their apartment ledges and were shouting their support.

The crowd would regularly erupt in rhyming chants such as “Hey, Hey, Ho Ho. Fossil fuels have got to go.” Every couple of minutes, a wave-like roar would roll through the streets. The majority of marchers boasted creative and provocative signs into the air.

The march from Foley to Battery Park took around three hours, and at the end the crowd met a huge stage that hosted a number of youth speakers, such as Kevin J. Patel and Isabella Fallahi from the Zero Hour environmentalism movement, as well as Greta Thunberg, the teen environmental catalyst who sailed to the US to speak at the United Nations climate summit.

All irony aside, it was an uncharacteristically hot day in Manhattan for protestors, especially ones who had been waiting for hours to see Thunberg. Many in the crowd passed out from the heat and speeches were repeatedly interrupted by calls for medical assistance.

After about an hour of listening to other speakers and performers, Thunberg appeared. In her plainspoken, no-frills language. She honed in on one of the biggest issues within the climate crisis: the people in power and their unwillingness to incite change. Her direct message deeply resonated with the attentive audience who cheered her on which, as she announced at one point in her speech, comprised of over 250,000 people in the New York City climate strike alone.

That number gave me a whole new perspective on the overwhelming scope of the activist community. It was only one year ago that Thunberg began sitting outside of the Swedish Parliament by herself, hoping to affect change. Not even one year later, this young girl, not unlike myself, is joined by 250,000 individuals partaking in unifying cry for change.

In a community like South Pasadena, which purports itself to be more left-leaning, I feel like the odd man out because of my extreme progressive beliefs. I had begun to internalize that all of society was against my values. Seeing that many people join together for a cause I cared about, however, changed my perspective by revealing other members of society who are just as impassioned as me.

As Thunberg asked in her speech at Battery Park, “Why should we study for a future that is being taken away from us?” For me, the climate strike involved missing class, tests, homework, and spending countless hours into the night making it all up. While it was a sacrifice, it was one I was willing to make.

While I was there, I found this community of like-minded people who had also taken off school and work and traveled to be here. This experience sparked my epiphany, helping me realize there are people like me that are passionate about this cause. Each one of us is only one person but collectively, we were 250,000 in New York and 4 million around the globe. This number and its vastness gave me a sense of belonging among a large group of people, fueling my revelation that more people care about important issues than what may be initially visible.