Top Posts
The current system of education cannot be tolerated...
Community applauds elementary school TK to 2 reopening
The process of military recruitment at high school...
Unhealthy relationships should not be glorified
Society needs to validate queer people
Students brace for possible cancellation of sports
‘Coming out’ should be on one’s own accord
City Council approves primary permit for Moffatt Street...
Consulting the cosmos: Astrology in 2021
Normalcy should not be the expectation
Home Color Day 2015 Issue There’s Nothing Spirited About Racism
Color Day 2015 IssueOpinion

There’s Nothing Spirited About Racism 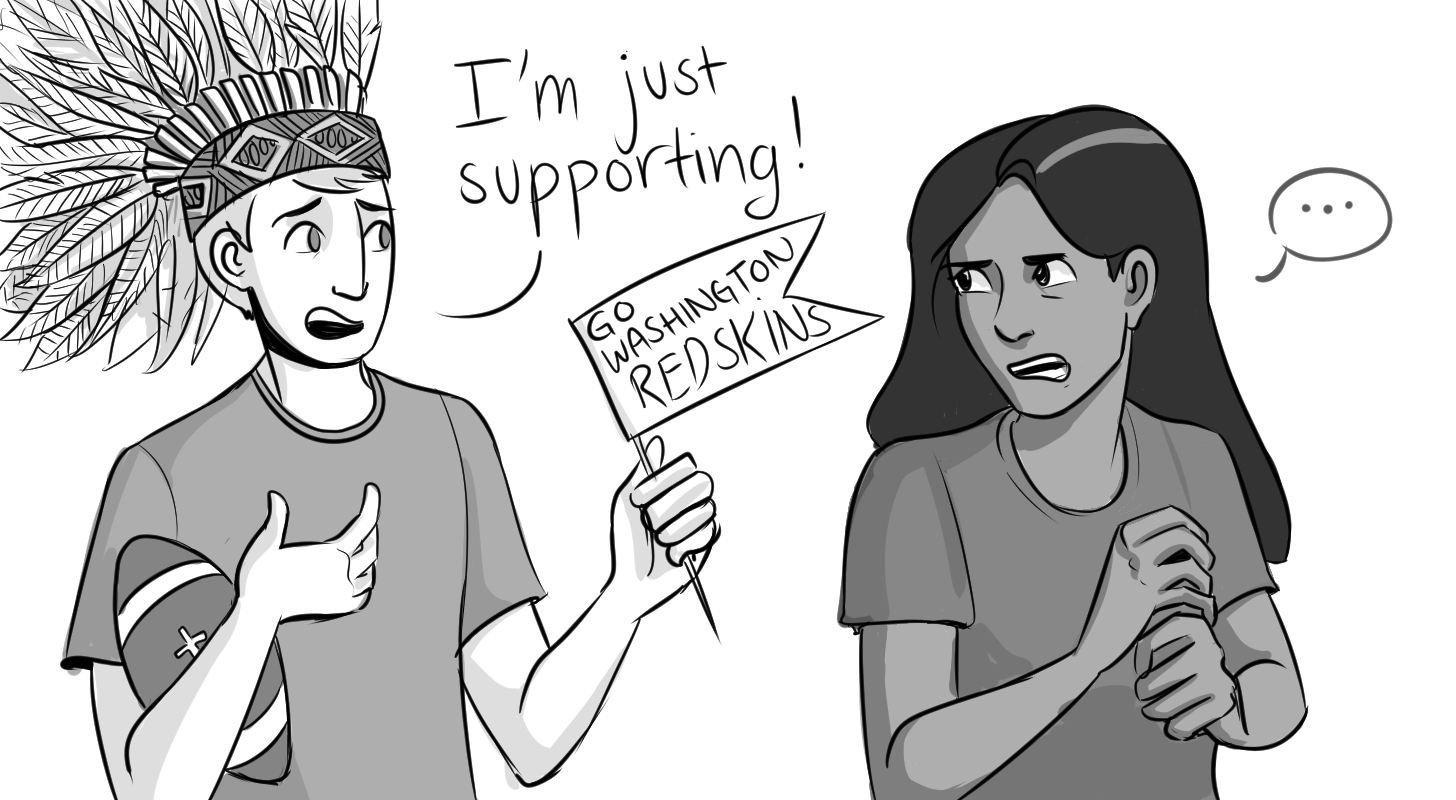 According to the National Indian Education Foundation, the high school graduation rate for Native Americans in 2014 was 50%, while the national average was 80%. Even though this immense gap can be attributed to many socioeconomic factors, at the heart of the problem is the oppression that Native Americans have faced since the USA’s founding, and the continuation of that racial power structure today.

An integral part of this oppression is the use of Native Americans as mascots. Sports teams across the country continue to represent themselves with cartoon versions of Native Americans, and often even name their teams after outdated racial slurs. While the Washington Redskins have received the most publicity for this offense, there are more than 2,100 schools and four professional sports teams across the United States that are guilty of the same crime.

The problem is that reducing entire ethnic groups to caricatures not only perpetuates harmful stereotypes, but successfully objectifies the people as a whole. Thus their culture becomes a commodity – which often leads to rampant cultural appropriation on game day. With a complete disregard for their cultural significance, the primarily white male fan bases of these teams don headdresses, war paint, and feathers in support of their team.

Not surprisingly, these acts of disrespect combined with degrading cartoons are detrimental to the way Native Americans view themselves. In fact, multiple studies performed by the American Psychological Society have proven that exposing Native American youths to images of these stereotyped mascots causes severe damage to self-esteem, as well as a depressed sense of community worth. Furthermore, the test subjects tended to associate the images with negative aspects of their communities such as poverty or alcoholism.

These negative associations are easily explicable when one looks at the inaccurate, offensive images and words sports teams use to represent Native Americans. With comical proportions and violent tendencies, most mascots are reminiscent of the outdated Hollywood-style Native American trope. And some, like Chief Wahoo of the Cleveland Indians, are simply overtly racist caricatures.

Arguably the most upsetting aspect of this issue is that the sports teams using these logos turn obscene profits from them. In 2014 the Cleveland Indians brought in a revenue upwards of $200 million. Native Americans have been decimated and manipulated for money and power since the founding of the U.S., and the revenue these sports teams are bringing in is eerily reminiscent of the profits white Americans made from seizing western native lands
in the late 1800’s.

For decades, oppressed ethnic groups have fallen victim to having their cultures and identities tokenized for the benefit of white America. To this day, we use racial slurs as team names. We dress up for game day in sacred Native American garb. We profit from cultural appropriation while Native Americans remain one of the poorest and underrepresented groups in America.
It is time for sports teams to retire racist mascots and monikers. Any team that continues to exploit Native Americans, or any other oppressed group of people, does not deserve our patronage or publicity. Native Americans are not sub-human caricatures that exist for the benefit of white America; let’s stop treating them that way.

What needs to change about how SPHS...