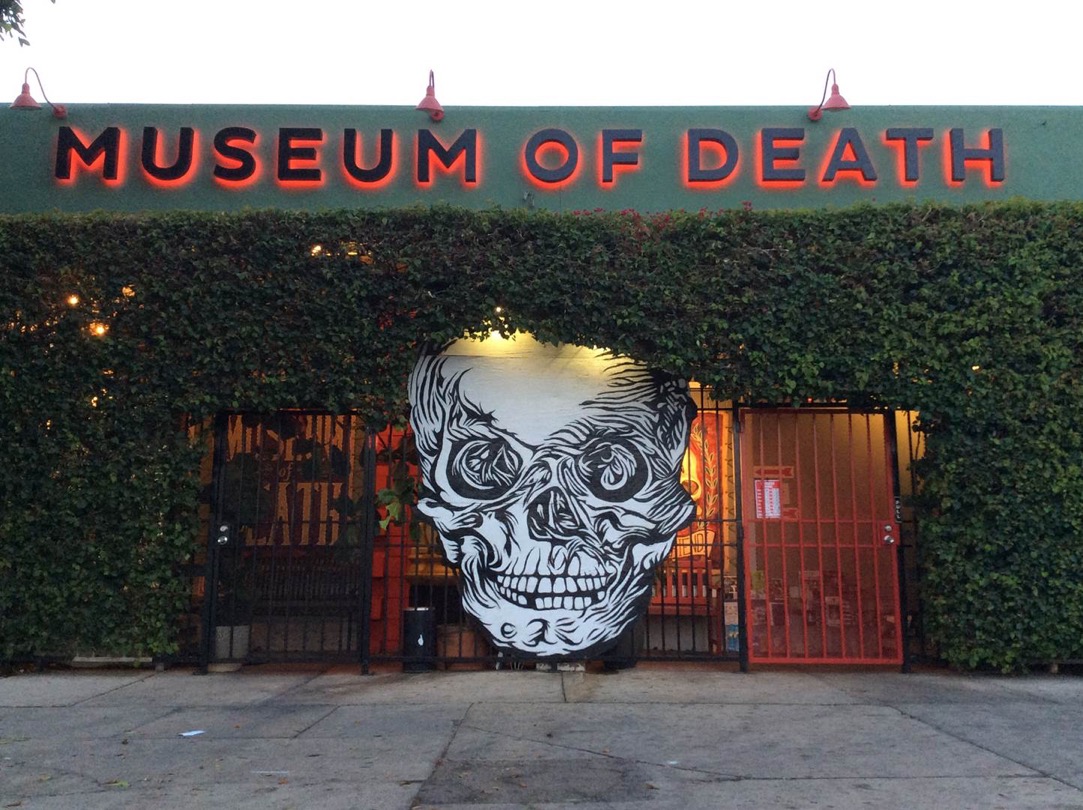 Filled with disturbing facts about death, The Museum of Death was opened in 1955 with the goal of "making people happy to be alive."

Photos courtesy of The Museum of Death
Contributor

The Museum of Death, aiming to fill the void in death education in America, is not for the faint of heart. Horror stories of visitors fainting from the graphic displays and artifacts housed inside are spread across the internet and even boasted about on the museum’s website.

After being evicted from San Diego’s first mortuary, the Museum of Death moved to its current location in Hollywood, a few blocks east of the historic intersection of Hollywood and Vine. The museum’s facade of a stark, flowered, black wall with a skull painting hints at the treasures found inside.

Walking into the first room, my friends and I were struck with the stifling smell of formaldehyde, a rather fitting yet probably unintentional touch. Each room held exhibitions under a loose theme, the first filled with murderers’ original artworks and photographs. A large portion of them belonged to American serial killer John Wayne Gacy, including his infamous clown painting “Goodbye Pogo.”

The next room spotlighted capital punishment. An executed person’s clothes were hung on the wall, splattered with stains of blood and flesh. On a plaque next to the model electric chair, was a list of haunting last words from the condemned such as a disturbing “I’m still awake” muttered by Robyn Leroy Parks after receiving a lethal injection. The mummified head of a sentenced man executed by guillotine was displayed in a glass box. The overwhelming barbarity was shocking, considering how this punishment is still practiced today.

There is a specific section dedicated to the Heaven’s Gate mass suicide, which the museum recreated with lifelike dummies. Seeing the eerily realistic display left a lingering impression on me because it felt like I was looking at the actual bodies. The exhibit is decorated with every aspect of the event along with a television looping a video of cult founder Marshall Applewhite. Something about his demeanor created literal nightmare fuel for me.

Further in the museum is a branch dedicated to Charles Manson and the Manson Family. Upon first walking in, I saw the very guitar that belonged to him, indicating that this museum was not just a labor of love but a serious collection full of priceless artifacts on the many forms of death. But that doesn’t necessarily mean that they’re above scare tactics either. Moving through the room, I was met with the terrorizing glare of the realistic looming figure of Charles Manson sitting over the doorway. A swastika patterned quilt sewn by the Manson family and photos from the infamous Tate-LaBlanca murders were strewn on the wall.

The experience of the Museum of Death is definitely something you have to prepare for: not eating before entering is a must. The museum is cluttered with overwhelming, vomit-inducing artifacts, photos, videos and more. Regardless, I found it intriguing to see the world’s largest collection of death related memorabilia. The macabre premonition is certainly present, and if you can stomach the experience, it is one that I would recommend and will return to once they rotate their inventory.