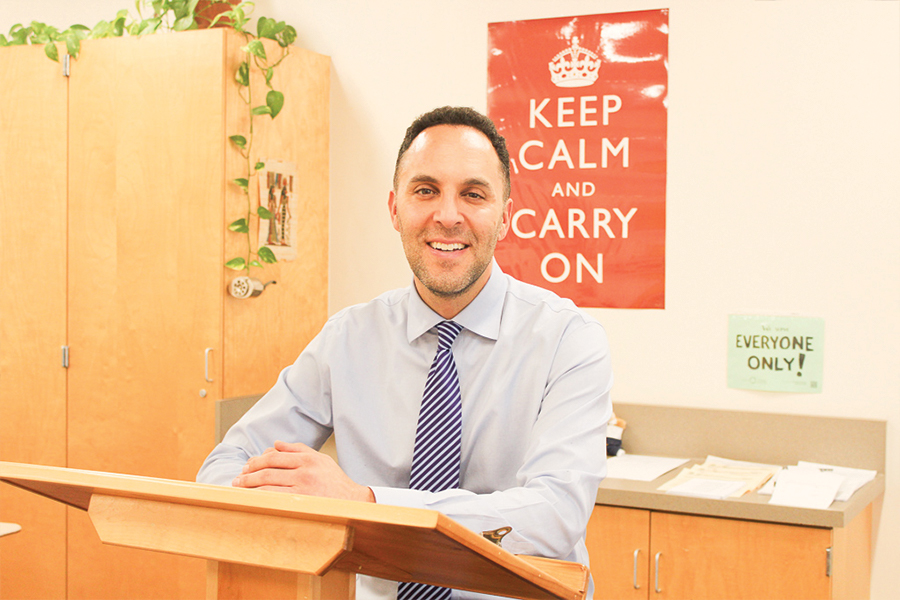 Constantly seeking connection with his students, Mark Afram is known across campus for referring to his students as “brothers” and “sisters.”

Mark Afram and his students covertly snuck into former SPHS teacher Mr. Stahl’s classroom to pull off a prank. In reference to Afram’s Egyptian heritage, the group stacked the desks into a pyramid. Of course, Stahl’s students retaliated, and over a weekend session, turned all of Afram’s furniture upside down, after which both teachers called a truce.

This anecdote, as silly as it is, reveals a lot about Afram’s personality and teaching style. His friendliness, good nature, and genuine concern for his students is the primary reason he is such a beloved and admired teacher, earning the nickname “Brother Afram” among his students. It’s common to hear students express that Afram inspires them to do their best because his principles have helped him create a desirable environment both academically and personally, by virtue of his engaging style.

Afram holds his students to higher expectations in regards to behavior or in-class discussions, which gives students an opportunity to learn and express themselves in a tolerant and open-minded setting. As a result, students feel heard and respected in the classroom. Afram has been known to call his students “brother” or “sister,” establishing a sense of camaraderie.

Afram studied English at UC: Berkeley, and despite his unique ability to connect with his students, he didn’t always want to be a teacher. After graduation, Afram stumbled upon a love for teaching by way of substitute teaching — a temporary side job he had taken on to support himself.

“It’s typically not a great job because the students don’t respect you or there are behavior issues, but I loved it. I had so much fun substitute teaching and I thought, ‘this is a really good sign if I enjoy this job.’”

So far, SPHS has proven to be the perfect complement to his disposition. Amiable and welcoming, Afram comes across as somewhat extroverted, but not in the loud, abrasive or boisterous sense. Rather, he’s confident, accessible, and interested in forming real connections. He’s known for his willingness to open up to his students and doesn’t shy away from discussing politics. By treating students as adults with his expectations of mature behavior in class, Afram’s students are able to reach an unmatched depth of authenticity during discussions about social and political issues.

“I don’t do students any service by hiding my views or not allowing them to share theirs,” Afram said. “It’s no secret that I’m a bleeding heart liberal but I hope that my conservative students can share their ideas, not feel threatened, and know it’s a respectful space.”

However, he wasn’t always been that open, formerly opting to keep his views under wraps in fear of unduly influencing students.

“I don’t believe that’s true now. I believe students can make their own decisions and I give them the freedom to make decisions.”

A generation of students has been defined by Afram’s one-of-a-kind personality that stresses open-mindedness. While it wasn’t necessarily his intention to find himself in a teaching job, his revelation has led to the addition of a unique and inspiring style of teaching at SPHS.