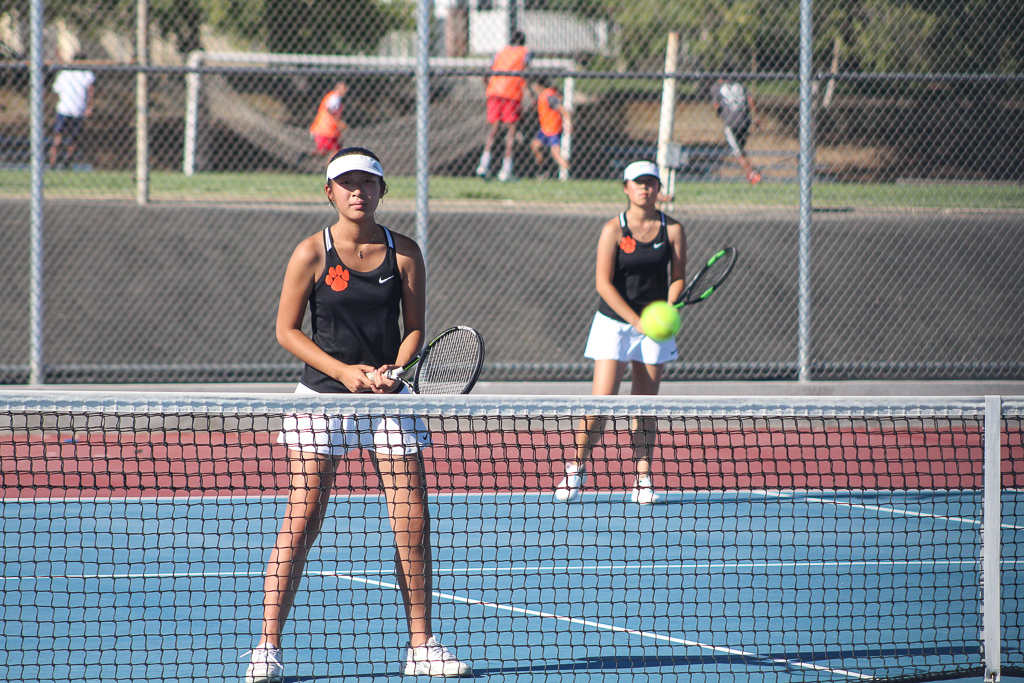 Juniors Meagan Chang and Sienna Chen won both their doubles sets, 6-1 and 7-6.

Girls tennis emerged victorious against John Marshall, beating the Barristers 14-4 Thursday, Sept. 12. The Tigers end their three match losing streak and now move up to 2-3 in the preseason.

The singles squad won the majority of their games, dominating the opposing Alhambra players. Singles one, junior captain Carissa Park, won her only set 6-0 and was substituted with sophomore Ava Feldman to finish out the last two games. Junior Olivia Reed, singles two, struggled with her first set but managed to close it out with a score of 7-5. The next two sets came easily, winning both with scores of 6-2. Freshman Kyra Campbell, singles three, fought for her first set and managed to win 7-5. She unfortunately closely lost her second set 6-4 but managed to pull through for her final set with a score of 6-3.

“It was a challenging game overall, but we proved ourselves and came out on top. We tried to come in tough and do our best to finish them off quickly,” Reed said.

Similar to the singles squad, the doubles squad had a successful game, only dropping one set to the Barristers. Doubles team one, junior Teryn Kum and sophomore Skylar Cornforth, easily pinned the opponents, winning all three sets 6-1, 6-1, and 6-0. Junior Kimberly Hsueh and sophomore Stephanie Li, doubles team two, likewise won the first set. Juniors Meagan Chang and Sienna Chen replaced them and easily defeated John Marshall in the last two sets, 6-1 and 7-6.

Doubles team three, sophomore Sarah Uwabo and senior Jessica Deng, was able to lock down their first and final sets, with scores of 6-3 and 6-1. For the second set, they were forced to play another game after an initial score of 7-6. Despite putting up an impressive fight, the doubles team three lost 8-6.

The girls team looks to continue its success on Tuesday, Sept. 17, against Glendora High School.