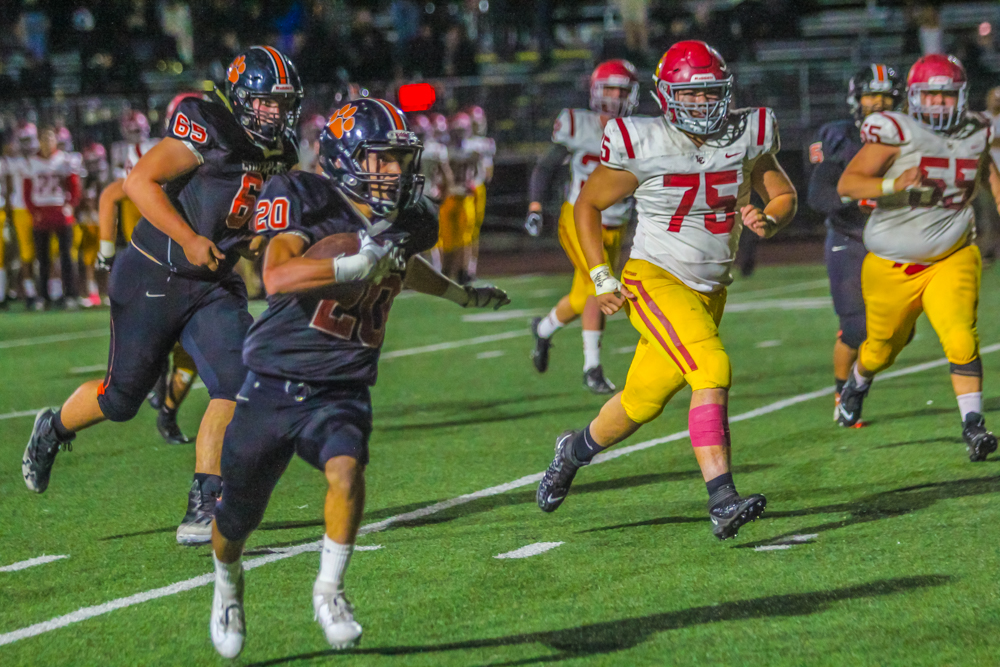 With a 40-10 statement victory to end the regular season, the Tigers will return to CIF competition for the first time since 2016.

The football team blew past the La Cañada Spartans, 40-10, after a slow start on Homecoming and Senior Night Friday, Nov. 1. The Tigers relied heavily on the ground game, with four rushing touchdowns and 208 rushing yards, while junior cornerback Terrence Sweetman, who leads California with 11 interceptions, snagged three picks en route to victory.

The game began as La Cañada quickly moved into South Pas territory. However, the Tigers’ solid red zone defense held the Spartans to only a field goal.

The South Pas offense stalled after a long run from senior running back Ethan Hong and turned the ball over on downs at the La Cañada 27. The stingy Tiger defense remained persistent and junior Brian Zepeda recovered a fumble, but the offense quickly went three and out.

In the second quarter, the Spartans followed up their early field goal with a rushing touchdown, putting the Tigers in a 10-0 hole.

With just over a minute left in the half, South Pas managed to finally scratch the scoreboard. Sweetman snagged a La Cañada pass, setting up a 37-yard bomb from senior quarterback Samuel Luna-Long to senior Ivan Estrada for six points. With a failed extra point attempt, the score seemed to be set at 10-6 for the first half of the game.

However, sophomore Jack Riffle recovered a fumble off of the kick off. South Pas sped down the field and grabbed the lead. Luna-Long found Estrada for a 24-yard score and their seventh connection for a touchdown this season. The Tigers entered the halftime break with a 13-10 lead.

The Tigers’ energy carried into the second half, leaving the Spartans scoreless. Senior Samuel Luna-Long set the stage with a three-yard rushing touchdown right out of the gate. Then, junior Jonathon Choi intercepted another throw, earning the ball back for senior Ethan Hong to score another touchdown and extending the South Pas lead to 27-10.

Added defensive pressure from Sweetman gave the Tigers more than enough opportunities for success. Estrada was able to squeeze in another rushing touchdown as well, followed by a failed two-point conversion.
Hong placed the final cherry on top, running 19 yards into the end zone and ending the game with a score of 40-10.

“We all came out and played our hearts out, especially the seniors. It could possibly be the last game for [the] seniors so we came out and gave everything we got,” Estrada said. “We’ve known each other for a long time and the chemistry between us is amazing and one thing for sure is that I’m going to miss playing with these guys.”

The Tigers will play Fillmore on Friday, Nov. 8, as a wildcard in the CIF D-XIII bracket.