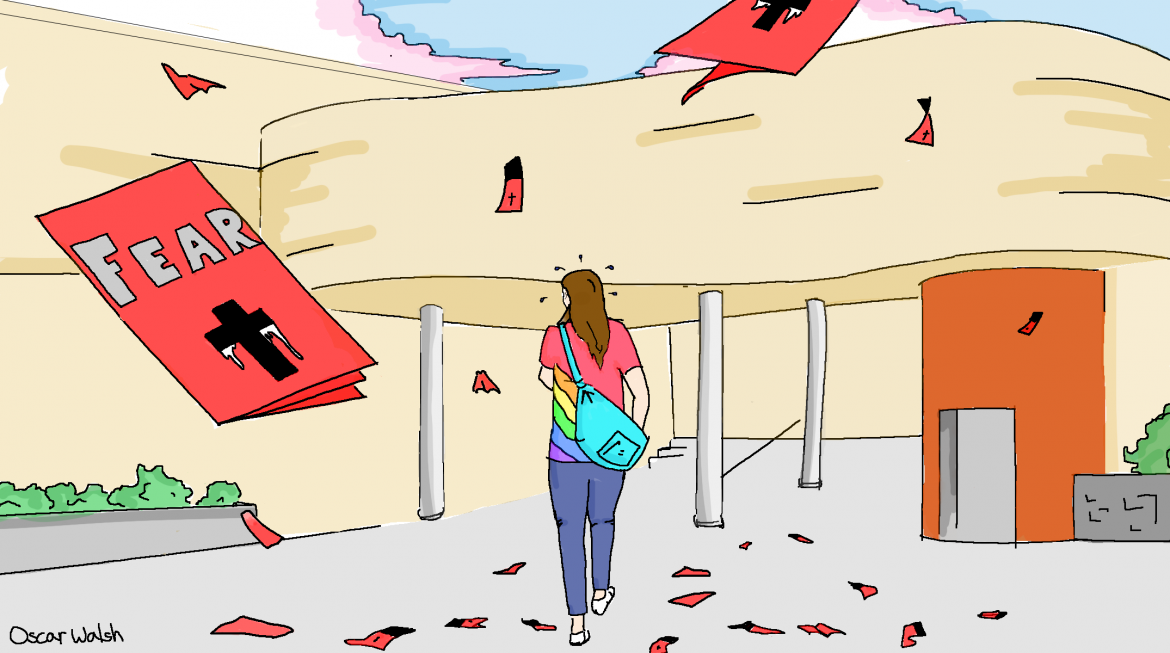 The religious pamphlets being distributed in front of SPHS are sparking conversation of where to draw the line between free speech and hate speech.

A woman has been standing on the corner of Bank and Fremont before and after school for the past few years, attempting to pass out religious pamphlets to SPHS students. Their religious aspect is not what phases students, but the homophobic remarks contained in them. Although it is her constitutional right to spread her beliefs and opinions to whomever she pleases, some have considered her remarks to be a blatant form of hate speech.

This woman is protected by her First Amendment rights, which state that the government cannot place laws into effect that restrict or promote a specific religious practice, or laws that limit publications in the press. While she is technically off school property, her presence still feels intrusive. Additionally, she hovers over students and attempts to force her beliefs onto them, hoping to sway the minds of youth that are clearly still impressionable. The woman isn’t technically violating any laws, but that doesn’t justify her attempts to change high schoolers’ viewpoints against a minority group. The discomfort it creates with students serves as a reminder that freedom of speech should not be an acceptable excuse for hate speech.

Beyond her questionable morals, the woman is also very aggressive when passing pamphlets to students.

“There’s a lot of times where I literally have to push her hand away,” junior Jessica Lat said. “A lot of the time I question whether she’s even allowed to do this because it just seems very invasive.”

Members of LGBTQ+ community at SPHS also feel ostracized by the woman’s homophobic actions and remarks and creates feelings of discomfort.

“Anyone saying that homosexuality is a sin, or anything similar, makes me extremely uncomfortable,” junior Jackson Monical said. “I wish someone as hateful as she wouldn’t stand in front of our school.”

Other organizations use effective methods for keeping unwanted presences away from their boundaries. Planned Parenthood dealt with their numerous protesters by enforcing a fifteen-foot buffer zone around all entrances and exits of the building. This form of protective legislation was established as constitutional under Members of City Council v. Taxpayers for Vincent, a 1984 Supreme Court case. In this case, the court ruled that the city of Los Angeles was allowed to ban the posting of signs on public property because the city characterized the signs as “visual clutter.” It is important to note that any form of legislation that bans a form of expression must not discriminate based on political alignment, and must be carefully worded to curb a specific issue. It must also have defined restrictions of time, place, and/or forms of expression.

Ultimately, the issue of hate speech on or near a school campus comes down to how students are entitled to feel safe both in and around school. People who stand dangerously close to school boundaries and suffocate passing students with hate speech shouldn’t be allowed to continue.

Solutions to protect students exist and should be enforced. A buffer zone outside of schools to prevent students from feeling unsafe is ideal, but students themselves cannot do much to implement this legislation. However, what they can do is show administration and the city that the solicitation of hate speech is offensive and is making students uncomfortable on campus. Students should never be put in a position where they have to compromise their education in order to feel safe. School campuses should not just be centers of education, but safe spaces where students don’t feel targeted.