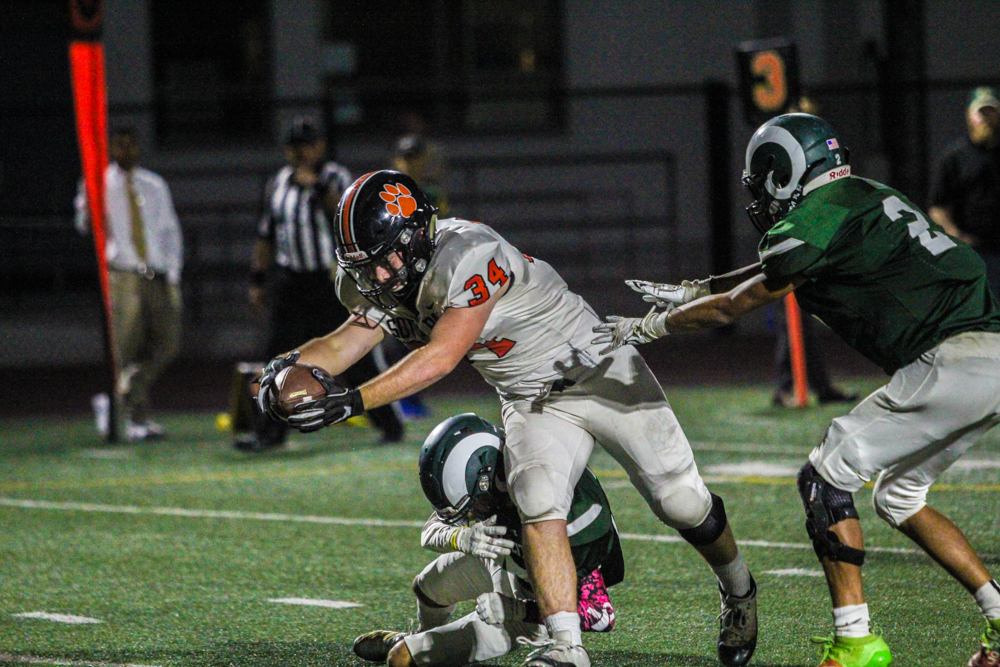 Football earned its first league victory in a rescheduled game against the Temple City Rams, 21-17, on Monday, Oct. 28. Behind senior running back Ethan Hong’s two touchdowns and a stingy defense, the Tigers moved up to 6-3 overall and 1-2 in the Rio Hondo League.

South Pas began with a gritty defensive effort, as senior cornerback Matthew Iwane made multiple tackles to keep Temple City out of their territory. However, the Rams fought back and climbed their way up to the South Pas 28-yard line.

The Tigers resisted, trying to create distance between their opponents and their end zone, but were unable to defend against Temple City’s aerial attack. The Rams found an open receiver in the end zone for the first touchdown of the night, making the score 7-0.

South Pas struggled to respond in the first quarter. Neither offense was able to find a rhythm after the initial score, resulting in a few exchanged punts. Suddenly, senior Ivan Estrada came out of nowhere with a long, game-changing run. He carried the ball up to the 25-yard line towards the end of the first quarter.

Near the red zone, coach Jeff Chi turned to Hong, who started the second quarter off with a run to the two-yard line. The next play, he wrestled through the Ram’s defense and scored the first Tiger touchdown. Senior Quentin Pithey followed with the point after and tied the game up, 7-7.

Seconds later, junior cornerback Terrence Sweetman chased down a long Ram pass, snagged his eighth interception of the year. intercepted it, and ran the ball all the way to the Temple City 35.

Senior quarterback Samuel Luna-Long started the drive with an 11-yard scramble, setting up the Tigers up at the Ram 14. Pithey finished the series off, charging into the Temple City end zone and scored South Pas’ second touchdown. Luna-Long made the extra point to push the Tigers to a 14-7 halftime lead.

Out of the halftime break, the Rams pushed the ball up the field and scored a touchdown five minutes into the quarter to tie the game at 14. The Tigers were unable to answer, as the offense seemed to lose all of its second quarter momentum.

A fantastic punt backed Temple City up to its own 10-yard line. The Tiger defense held the Rams to a three and out and received the ball just outside the red zone. However, South Pas handed the ball right back, fumbling the ball at the Temple City 24.

The Tigers mustered up a crucial stop early in the fourth quarter, giving their offense seven minutes to break the tie. Hong had two breakaway runs, bringing South Pas into the red zone in under a minute. Then, he capped off the drive with a 19-yard touchdown, putting the Tigers ahead, 21-14.

With around six minutes remaining in the game, Temple City took its time advancing the football. The Tiger defense was unable to get off the field, allowing a fourth down conversion at its own 34.

The Rams picked up the pace, driving to the opposing seven-yard line, but the Tiger defense stood strong. South Pas batted down a second down pass and time expired before Temple City could attempt another play.

“Being honest, we didn’t play our best game tonight. We were sloppy. However, we showed a lot of heart out there and fought until the very last play, and that’s what caused us to win this game,” sophomore Jack Riffle said.

The Tigers will host La Cañada in their last league game on Friday, Oct. 1.

Girls tennis finishes season with a loss to La Cañada