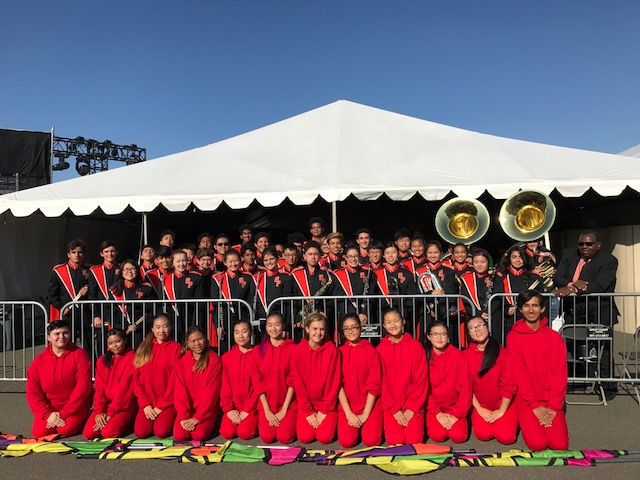 SPHS' Band and Color Guard were in uniform for their performance, the culmination of rehearsals and practice.

The marching band and color guard represented SPHS Friday, September 8 in the at XQ Super School Live show. Their performance, aired on ABC, NBC, CBS, and FOX, focuses on drawing attention to life preparedness in high school, instead of solely focusing on college.

The Tigers bused to Santa Monica in order to film the show that day after continuous work and rehearsal. More than two weeks worth of in- and after-school practice contributed to their final performance of “Come Together.”

“None of us were really scared about performing,” junior Becca Hall said. “We felt so well prepared that there was just no need for nerves.”

The program, also known as “Project XQ,” was assembled by Laurene Powell Jobs and Russlynn Ali, the former Assistant Secretary of Education for Civil Rights under President Barack Obama.  It serves with a goal of “rethinking high school” to revolutionize the education system.

Along with celebrities like Viola Davis and Tom Hanks, notable school organizations were chosen for the event. Producers initially spotted and recruited the Tigers as the sole high school band after viewing a YouTube-posted performance. The Tigers hope that the exposure from the show will lead to other opportunities.

“Overall the experience was simply amazing. We even saw up-close Samuel L. Jackson, Tom Hanks, and Jennifer Hudson who sang and performed with us,” said senior Elaine Wang. “It was like being in a situation where you were jealous that other kids were so lucky to perform and meet these celebrities, but this time, the SPHS Band and Color Guard had the opportunity to be there.”