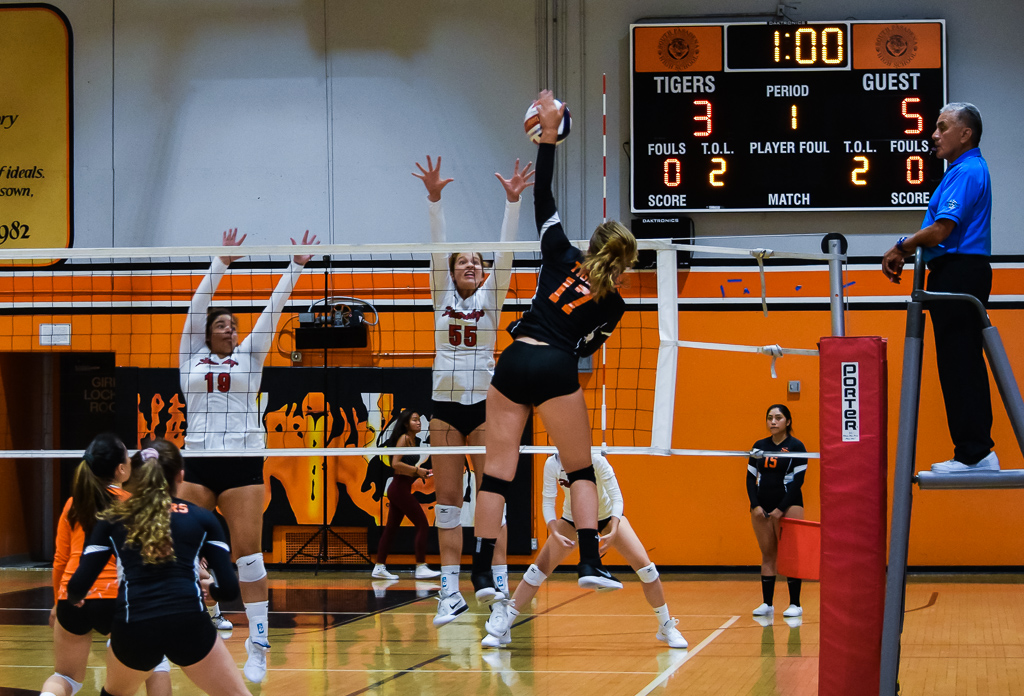 Behind strong performances by Foord (17) and Florence, the Tigers eeked out a win.

South Pas started off the game strong with a victory in the first set. Throughout the close set, junior Katherine Florence and sophomore Abby Garner delivered several powerful spikes, leaving FSHA defenseless. The Tigers ultimately won, 25-23, thanks to a strong block by junior Carrie Fleming.

However, South Pas’ winning streak did not last long. In the second set, the Tologs secured an early lead and took advantage of their ruthless hitters. Junior libero Lindsey Hirano kept countless rallies alive, but the Tigers’ lack of communication proved and inaccurate hits to be fatal as FSHA beat South Pas 14-25

In the third set, the team regained focus in hopes to redeem themselves and break the tie. Freshman Sofia Reyes served numerous aces, inching the Tigers closer to victory. As the set came to a close, freshman Ava Dorny and junior Lola Foord worked together to block an incoming spike, bringing the score to 24-18. This enabled South Pas to successful win the set, 25-18.

As the Tigers began the fourth set, tensions ran high among the teammates. The set was close, with the score frequently being tied, but South Pas was unable to keep up with FSHA’s powerful blocks. The set slowly slipped away from the Tigers and the Tologs won 25-17.

South Pas entered the fifth and final set determined to win. They started off strong, displaying fierce defense against FSHA’s spikes. Sophomore Kennedy Taylor made a particularly strong hit, bringing the score to 10-6 Tigers. The set was neck and neck, but in the end, an erratic FSHA serve landed out of bounds and the TIgers emerged victorious, 15-14.

“We really worked together in today’s game and pushed till the end with all the energy we had until the very end,” sophomore Alyssa Sokolow said.

The Tigers hope to continue their winning streak on the road next week, when they play La Salle on Tuesday, Sep. 10.