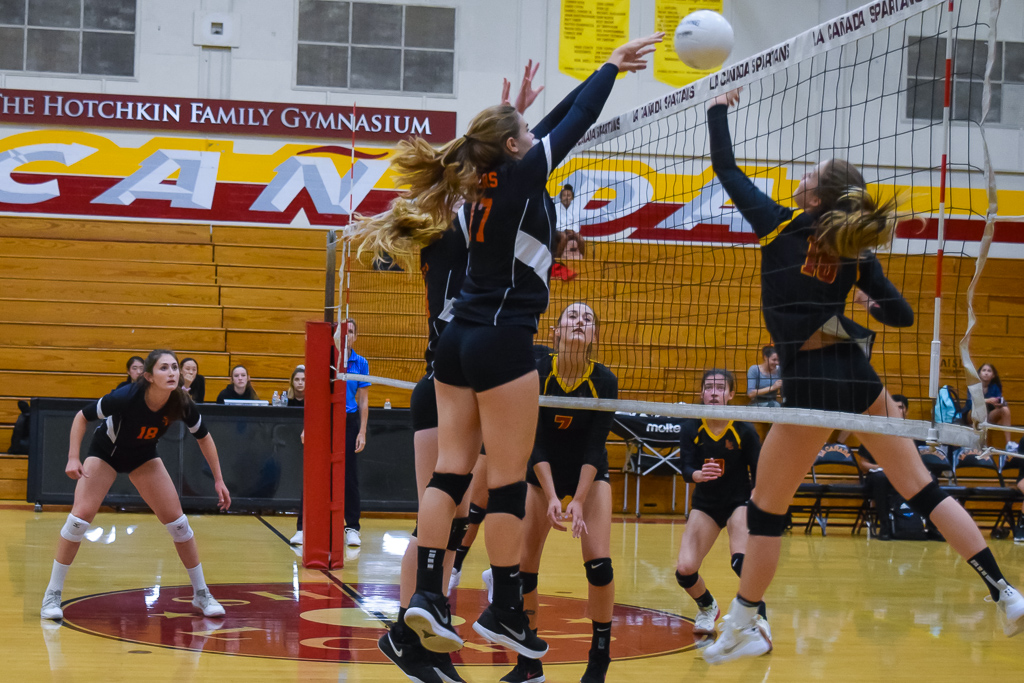 The girls volleyball team was victorious against La Cañada in five sets on Tuesday, Sept. 24. After beating San Marino and Monrovia, this win brings the team to first place in the Rio Hondo League.

South Pas began with a rough start, as they were unable to keep up with La Cañada’s powerful hits. Sophomore Erin Hughes and freshman Ava Dorny led a revitalized defense later in the set, impressively blocking many incoming spikes, but the Spartans answered with an incredible defense of their own. The Tigers made many mistakes and mis-hits throughout the set, ultimately allowing the Spartans to win 25-17.

After losing the first set, the Tigers were determined to make a comeback. The second set was dominated by La Cañada kills, as South Pas was unable to get to the ball fast enough. Although the Spartans took advantage of an impressive setter, the Tigers were able to persevere and maintain a close lead. Throughout the set, freshman Sofia Reyes set incredible balls, giving junior Lola Foord the opportunity to make various kills. As the set scores neared 25, the intense rallies grew longer. Finally, Dorny and Foord combined for a devastating block and won the set for the Tigers, 25-23.

Committed to keep their winning streak alive, the Tigers increased their energy and worked well together during the third set. Juniors Lindsey Hirano and Sydney Abundo both aided in South Pas’ success by serving numerous aces. As the set came to a close, the Spartans began to recover, but a serve from sophomore Kennedy Taylor finished off the set, 26-24, Tigers.

However, the Tigers’ success did not continue in the fourth set. The set was littered with lead changes, but despite sophomore Alyssa Sokolow’s saves and sophomore Abby Garner’s kills, La Cañada defeated the South Pas, 25-23.

In the determining set, the Tigers were intent on emerging victorious. Junior Lexi Schroeder provided excellent passes and sets to help them secure an early lead. But, towards the end of the set, South Pas began to falter with erratic serves and inaccurate hits. La Cañada was able to surge ahead and gain a few points on South Pas. The set finally ended when Sokolow spiked a corner kill, signaling a loss for the Spartans, 15-13.

“We worked really well together today. We had good team chemistry and supported each other throughout the game. We didn’t let our mistakes get us down and we never gave up. Even when our energy levels were going down.” Schroeder said.

Now undefeated in league play, South Pas will look to improve to 4-0 when they host Blair on Thursday, Sept. 26.