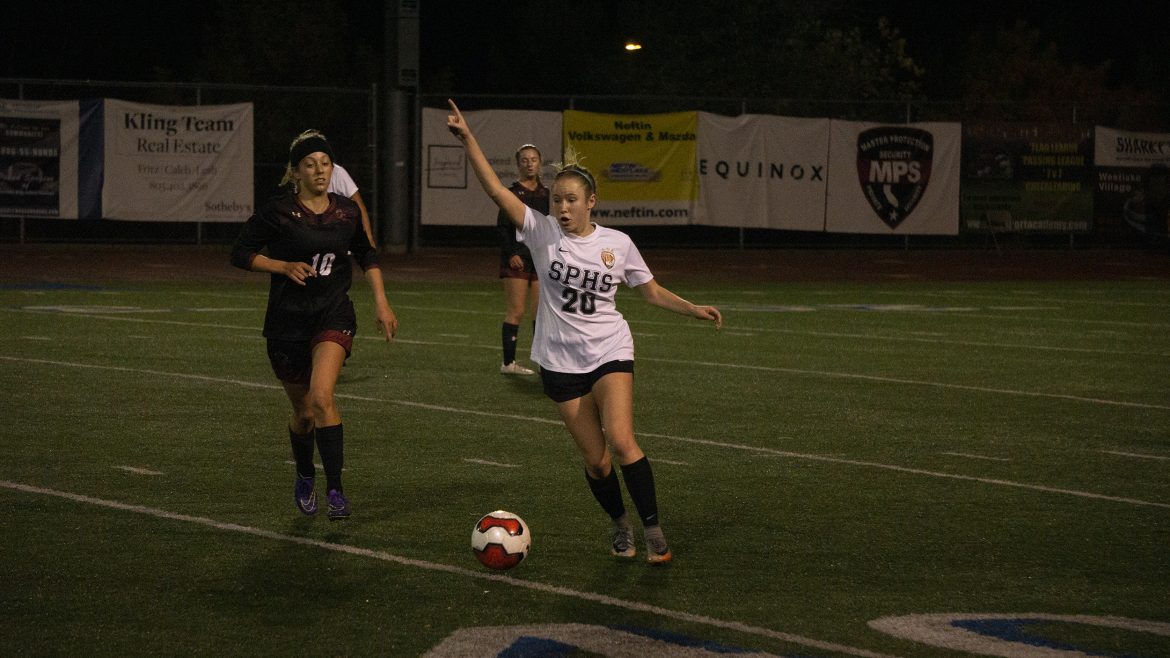 Moving into the second half of league, girls soccer hopes to improve upon a disappointing 0-4 league record.

Girls soccer suffered a nail-biting 2-1 defeat against rival San Marino on Wednesday, Jan. 22. The Tigers have lost all four of their league games and stand at a 5-3-9 overall record.

Throughout the game, the Tigers created scoring opportunities with ease, but failed to finish all but one of them. San Marino pestered the vulnerable South Pas defense through quick counterattacks, coming from behind to win the game, 2-1.

Senior captain Corey Segal initiated South Pas’ fiery first half with a powerful shot after dribbling down the left wing. The Tigers strategically utilized the sides of the pitch to move the ball forward through strong passes stemming from the midfield. Sophomore Ava Dunville was instrumental to those play developments by bodying Titans off the ball to regain South Pas possession.

The Tigers won several corner kicks early on through the attacking trio of Segal, senior captain Jessica Lat, and senior Andrea Castellanos. But, San Marino subsequently ran the ball down to the Tiger half and proved a menace for the South Pas defense. Junior keeper Andrea Zarazua rescued her team many times through her diving saves and much-needed communication.

South Pas made up for its subpar defending via the spectacular passing of senior captain Chloe Kim. She laid the foundation for the Tiger attack in the midfield, completing one-two passes with Segal and Castellanos.

The teams were evenly matched: South Pas controlled possession and had more chances, but San Marino proved lethal on several counterattacks. Despite myriad offensive opportunities, the Tigers did not score in the first half and the game remained a 0-0 tie.

Off of a corner kick rebound, Lat nearly scored the first goal of the match with her shot into the bottom left corner. Then, senior Hannah Thompson barely missed the net when her strike sailed inches above the crossbar.

But it became Castellanos who would seal the deal minutes later. After another powerful free kick by Kim, Castellanos easily trapped the ball, turned, and calmly fired it into the net from 10 yards away.

San Marino retorted with a shot to the bottom left corner on a breakaway, leveling the score at one apiece. Seemingly shocked, the Tigers’ performance declined. They struggled to find the connections they had throughout the first half and were forced to play more defensively.

Freshman defender Daniella Lat anchored the back line by chasing down and clearing dangerous balls with her speed. Her performance rallied the defense to create a list ditch effort to block a Titan counterattack in the later part of the second half.

South Pas found some new offensive spark in junior striker Kaylee Wallace and her impressive passing and quick ball movement. The Tigers’ final scoring chance started with a give-and-go between Kim and Wallace, who crossed the ball to Lat, whose shot fired just wide.

Although the teams played evenly the entire match and South Pas creating more scoring chances, San Marino walked away with the victory. A Titan player crashed the goal following a shot that hit the crossbar in the 73rd minute, ending the match 2-1.

“In these past two games we’ve come out strong in the first half and then in the second half we’ve lost that spark,” Zarazua said. “In the second half, there’s this lack of communication in the defense and that’s why the two goals were scored.”