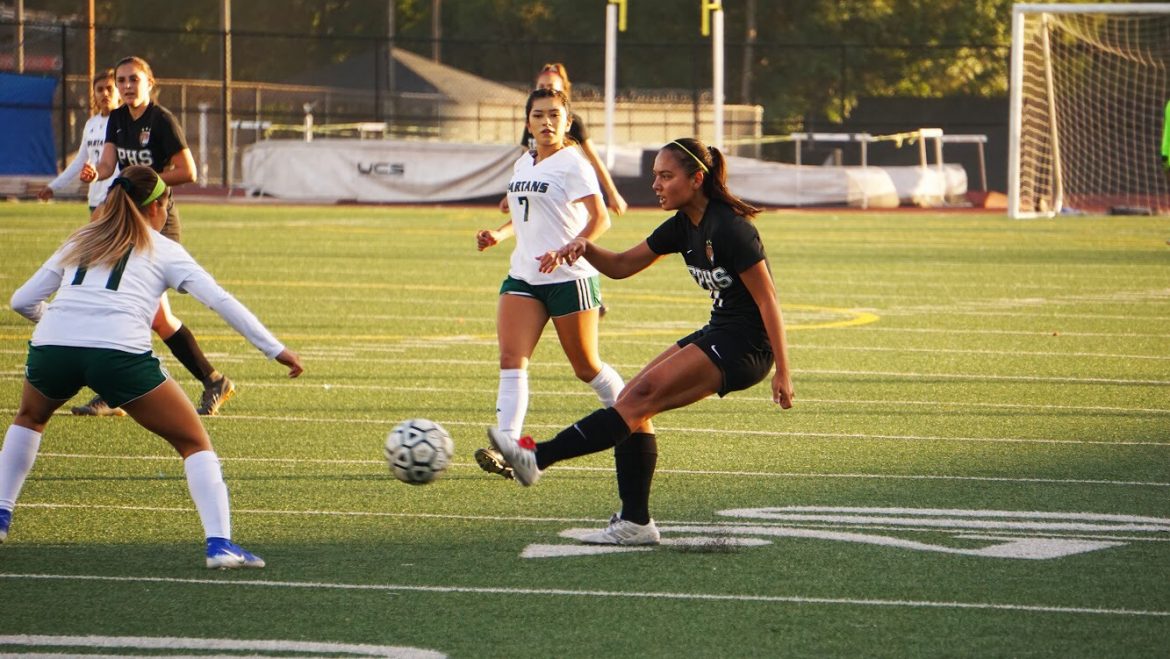 Girls soccer lost to Temple City, 5-2, on Wednesday, Jan. 15. The Tigers now drop to 0-2 in the Rio Hondo League, sinking to fourth out of the five teams.

South Pas struggled from the starting whistle and played poorly as a unit, falling into a two-goal hole in the 18th minute. The second half was more of the same and the Tigers conceded three goals in the first 15 minutes of the second half. However, senior captain Jessica Lat fired two shots into the net during the closing few minutes, and the team walked off the pitch with a 5-2 loss.

The Tigers had trouble adjusting to Temple City’s smaller grass field and the absence of key starters, senior Corey Segal and sophomore Ava Dunville, allowing the Rams to jump ahead in the fifth minute. South Pas players were often congested on one side of the pitch and had trouble retaining possession, turning the first half into a turnover-riddled match.

The defense lacked communication and its usual tough front as the Rams’ long balls repeatedly broke through the Tigers’ back line. Temple City soon found the back of the net again after South Pas failed to mark players in the box.

Despite a desperate Tiger attack, the Ram defense never wavered. All of senior Andrea Castellanos’ long shots were comfortably saved and fellow senior Hannah Thompson’s attempts on the left wing were futile.

South Pas struggled from a lack of aggressive play and lost nearly all of the 50-50 balls. While several individual moments were noteworthy — a beautiful chip pass by Lat adjacent to the sideline and Castellanos’ valiant slide tackle to stop an opposing breakaway — the Tigers were devoid of much team chemistry at all.

However, the team claimed a solid spell of possession within the final minutes of the first half, which they carried into the remaining 40 minutes. Still, renewed intensity and a flying penalty kick save by junior keeper Andrea Zarazua were not enough to prevent another Temple City goal.

All South Pas players tracked back on defense, yet the Rams struck again and again, widening their lead to 5-0. The Tigers were visibly and audibly frustrated, but Zarazua’s encouraging shouts and Lat’s assertive communication and shots prevented them from shutting down completely.

Lat carried her positive energy into her play as she won two consolation goals for her team. Her first shot hit the crossbar and then bounced off the goalie’s back into the net. Two minutes later, she struck again with a well-placed kick into the bottom right corner.

The team closed out a poor performance positively with two consecutive goals, settling for a 5-2 loss.

“[We have] so much love off the field for each other, [but during] the first part of the game we forgot that,” Lat said. “Towards the end, we started to remember to play for each other and also to play for ourselves.”

South Pas will attempt to improve its RHL standing against Monrovia at home on Friday, Jan. 17.