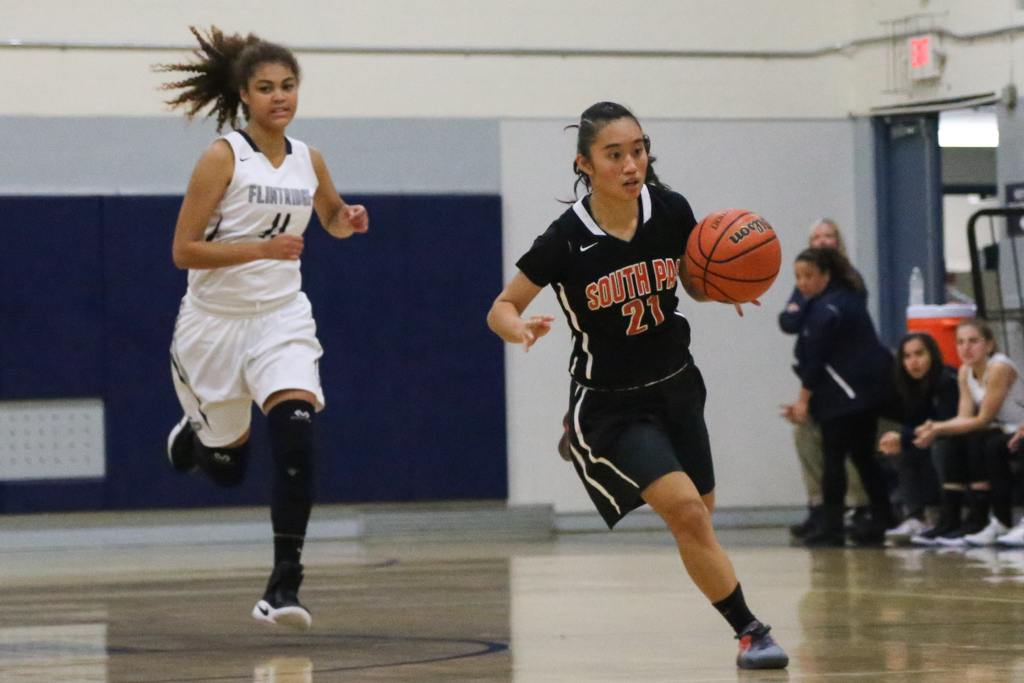 The girls’ basketball team fell to Flintridge Preparatory School 64-57 on Tuesday, December 13 in its first non-tournament preseason game. The Tigers remained close in score for almost the entire game until the Rebels managed to pull ahead, leaving South Pas unable to catch up. Despite the strong effort, this loss puts the team’s record at 5-6.

Prep was the first to strike, scoring a basket after an attempted Tiger layup went out of bounds. However, sophomore Lauren Kafkaloff quickly retaliated with a shot of her own after a rebound to put the score at 2-2. The two teams remained within mere points of each other for the majority of the first quarter, as both displayed strong attacks and solid defense. Senior Jade Lin gave South Pas a small lead midway with a three. The Tigers managed to stay in front off of points from Kafkaloff, though the Rebels managed to tie the game 15-15. Senior captain Jalynne Li broke past a Rebel with a fake, causing the defender to fall, to make a drive to the basket at score to end the quarter 19-19.

Senior Juliana Tom immediately opened the second quarter with an attempted three, though it did not fall. A Prep drive to the basket brought the score to 19-21, and Kafkaloff instantly scored an equalizer. Li and Tom created several opportunities for the Tigers, though not all chances were capitalized on. South Pas and the Rebels continued to be within two points of each other, with one team scoring and the other quickly tying the game. The Tiger defense began to show cracks, however, as at one point a Prep player stood alone under the net and easily distributed the ball for an easy shot. Exiting the first half, South Pas trailed 30-25.

Tom rapidly capitalized on an open opportunity, knocking down a three coming into the third quarter. She followed with another basket to tie the Rebels, who had earned a point off of a free throw, at 31-31. Li soon followed with a layup on a breakaway to allow the Tigers to take the lead. South Pas continued to pound away at Prep’s defense, winning many rebounds and earning many shots. However, several shots did not go in, and the Rebels were able to find a considerable amount of opportunities too. Eventually, the Tigers were down 39-49. Tom managed to shift the momentum in the Tigers’ favor for the remainder of the half after sinking two consecutive free throws. Kafkaloff soon followed with a basket to put the score at 44-49, which would remain this way until the end of the quarter.

Neither team was able to find the basket at the beginning of the fourth quarter. Both had several shots and good ball movement, though it wasn’t until Li broke free to score that points were put on the board. The Tigers fought to remain close, and a basket from Lin brought South Pas within two points at 53-55. However, the Rebels passed and dribbled around the Tiger defense, and began to widen the gap in scores. After a basket from junior Tiffany Holmes, South Pas grew increasingly frustrated as the clock wound down, giving up several fouls in the last minute of the game. The Rebels used this to their advantage, and put away the given free throws. A Tom layup was followed by two converted Prep free throws, ending Tigers’ chance of catch up in the last few seconds. After attempted shots from Li and Tom, the buzzer sounded, signifying the end of the game at 64-57.

“I think both teams came out strong and were even throughout the whole game. We should’ve won, but our shots didn’t fall and it unfortunately did not go our way,” Kafkaloff said. “Our aggressiveness towards the boards allowed us to stay close with Prep along with our pressure on defense. However, we can improve on our consistency in games and our verbal play. With an improvement on talking, I think our team can form a strong defense and has the potential to go undefeated in league.”

The Tigers next face Marlborough away on Wednesday, January 4, where they look to even earn a win in their final preseason match.