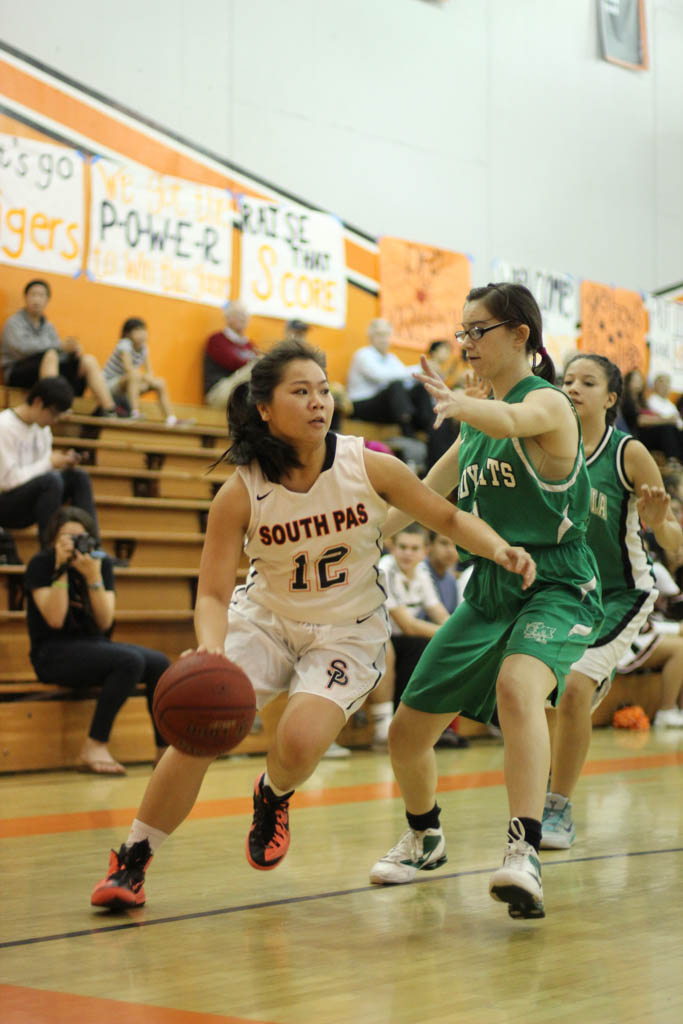 The girls’ basketball team took their senior night by storm at home against Monrovia High School last Tuesday, February 10, defeating the Wildcats with a score of 69-30. With this win, the girls broke the school record for most consecutive victories, with 13 victories in a row under their belt. They also demolished the old record of 14 consecutive league wins set by the 1992-1995 team, racking up an 18 game win streak in the Rio Hondo League win tonight’s victory.

The team took the court with an all senior starting lineup made up of Lexie Scholtz, Elise Takahama, Sophia Hathaway, Taryn Kato, and Natalie Song.

The girls kicked off the night when point guard Scholtz thundered down the lane for a quick two points. Monrovia responded right after when guard Lindsey Pena managed to score two points. However, South Pasadena answered back when point guard Scholtz and Song both converted two points each for a strong lead against the Wildcats. Guard Pena kept the lead close with a three pointer from the corner alongside guard Hare with two free throws. From there the Tigers got into a rhythm and stretched the lead, marked by a three pointer by junior shooting guard Kristen Kafkaloff. She was followed alongside her teammates Song and Hathaway who helped close out the first quarter with a score of 21-7.

The Tigers came back out the second quarter with tough defense on their opponents and continued intensity. One by one the girls kept chalking up buckets until Wildcat guard Zoe Bowden sank a three pointer. Regardless, Scholtz pushed the tempo and racked up eight consecutive points on the board, only to be stopped by Monrovia guard Chrisley Banzuela, who sunk three points, to finish the half for a score of South Pasadena 42, Monrovia 15.

Starting the third quarter, the girls maintained their dominance on the court, determined to take the victory. South Pas kept Monrovia on their heels and continued to overpower the Wildcats well into the fourth quarter for a final score of 69-30.

“It felt really weird walking into the gym tonight, knowing it was my senior night,” Kato said. ”It doesn’t feel like it’s already been four years, but I’m thankful for the experiences, but most of all, the friends I’ve made through being on this team.”

Undefeated in league with a 9-0 record, the girls are looking for their final Rio Hondo league victory at San Marino High School on Thursday, February 12 at 5:15 p.m.

“It doesn’t seem like I’ve only known these girls for a couple years and I cannot believe that our season is almost over,” Scholtz added. “Senior night may have been the beginning of the end but we’re not done just yet. We still have some unfinished business to take care of and we’re a family above all, so even once we’re done on the court we’ll still always have eachother.”