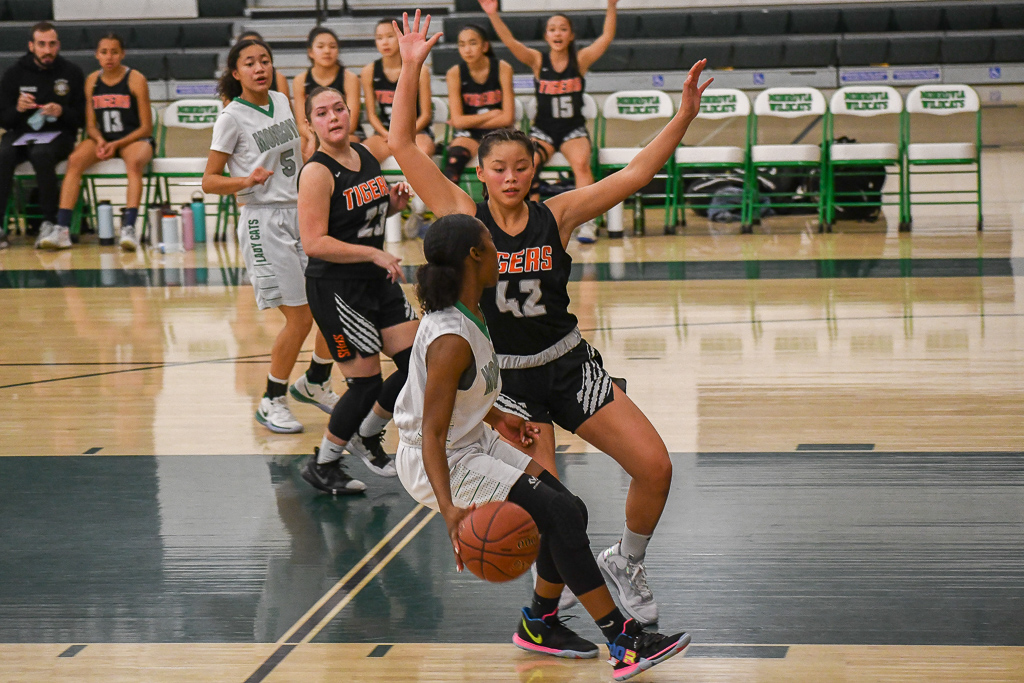 The Tigers' organized defense held the home team to only 25 points.

Girls basketball delivered a crushing 66-25 defeat to the Monrovia Wildcats on Friday, Jan. 17. The Tigers maintained their lead throughout the entire game, coasting along the way to bump their league record to 2-1.

The Tigers came out of warmups sluggishly. South Pas players fumbled the ball as they rushed through their offensive sets and allowed Monrovia to hang around. However, the Tigers managed to squeeze by and ended the quarter, 11-9.

In the second quarter, South Pas saw a vast improvement as they quickened their offensive play against Monrovia’s high-pressure defense. The taller Wildcat team managed to block out a few of their shots and the Monrovia student section created outside distractions for the Tigers, cheering on their team when a South Pas player was knocked to the floor.

However, the Tigers refused to be deterred and pressed on. Sophomore Alyssa Chan and senior Charlize Kruzic scored some crucial points that kept the team well ahead and widened the gap to 31-14 by the end of the half.

The third quarter was another strong period for the Tigers as the Wildcats started to loosen their grip on the ball. Both sides kept up a strong defense, and the third quarter turned into a gritty, physical battle.

On the offensive side, sophomore Allysan Tse exploded, nailing her free throws and triples. She scored the majority of the Tigers’ points and brought the score up to 41-23.

The Tigers were already well ahead by the fourth quarter, but they continued to attack with the same level of intensity. They kept the ball out of the Wildcats’ possession and stormed up and down the court, never easing off the gas pedal. The Tigers overpowered the Wildcats and closed out the game with a 66-25 win.

“We expected a win, but we also wanted to completely blow them out,” Tse said. “Everyone had an amazing game and I’m really proud of the team.”

The Tigers’ next league matchup will be against the San Marino Titans on Wednesday, Jan. 22.