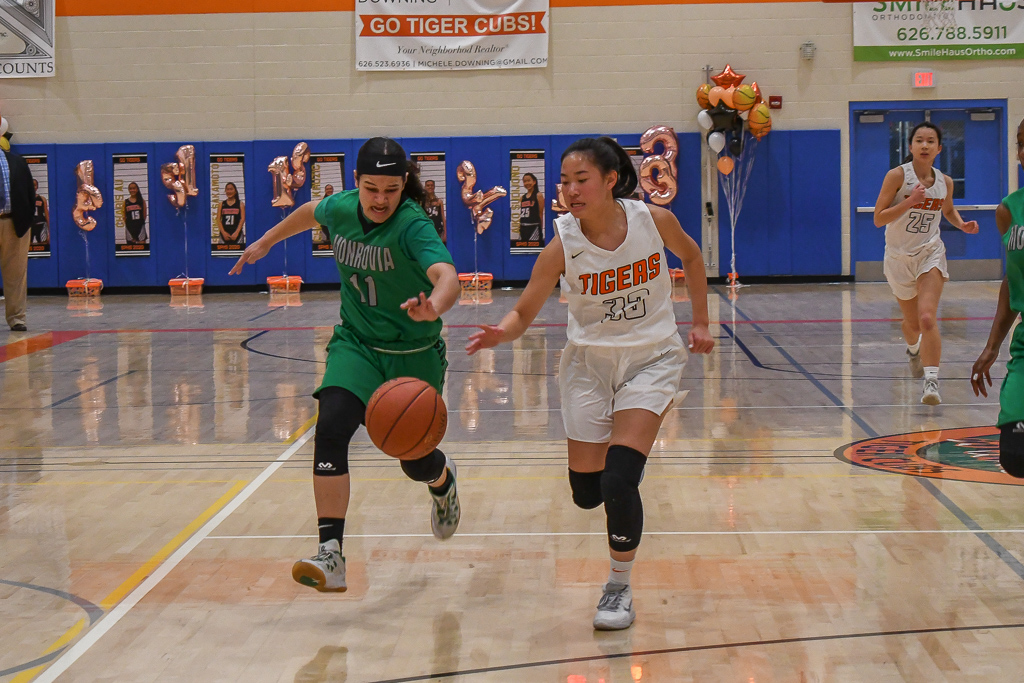 The Tigers will play their final league game on the road against San Marino Thursday, Feb. 6.

Girls basketball obliterated Monrovia in a 67-32 victory on Senior Night Tuesday, Feb. 4. The Tigers stayed well ahead of the Wildcats for the entire game but had a slow start due to unclear communication and overanxiety. They managed to pick up the pace during the second half and overwhelmed Monrovia by a much wider point margin than in the first half, bringing their Rio Hondo League record to 5-2.

The last home game of the season, the team celebrated the departure of graduating seniors. All seven seniors received flowers and balloons from their underclassmen teammates during the pregame warmups.

The Tigers’ starting lineup featured all seniors and they jumped out to a fast start. Seniors Aiko Sudijono and Charlize Kruzic opened the game with strong play, sinking the first few baskets. However, the Tigers’ plays felt unusually disconnected and sloppy, with the players missing each other’s passes and not employing their usually aggressive defense.

It seemed as though the Wildcats were experiencing the same communication issues with their own players, so the Tigers were able to force a few turnovers and closed out the quarter ahead, 11-6.

The Tigers ran into some similar performance issues during the second quarter, missing their shots due to the Wildcats’ defensive frenzy. South Pas consistently controlled the boards and forced turnovers, but weren’t able to finish many of their layups. Still, with free throws and a swift jump shot by Kruzic in the final seconds, the Tigers stayed in the lead at 25-15 when the buzzer sounded.

The match picked up in the second half as the Tigers fell out of their funk and quickened their plays. Seniors Megan Yee, Charis Au, Kruzic, and junior Michelle Jee propelled the team forward as they nailed triple after triple. The Wildcats were unable to keep up with the faster pace and they were left in the dust as South Pas coasted comfortably to a 67-32 win during their last home game of the season.

“I was glad that we ended Senior Night on such a positive note,” Yee said. “The night was unforgettable and a memory that I will cherish forever.”

The team will compete in its final league game against the San Marino Titans on Thursday, Feb. 6.