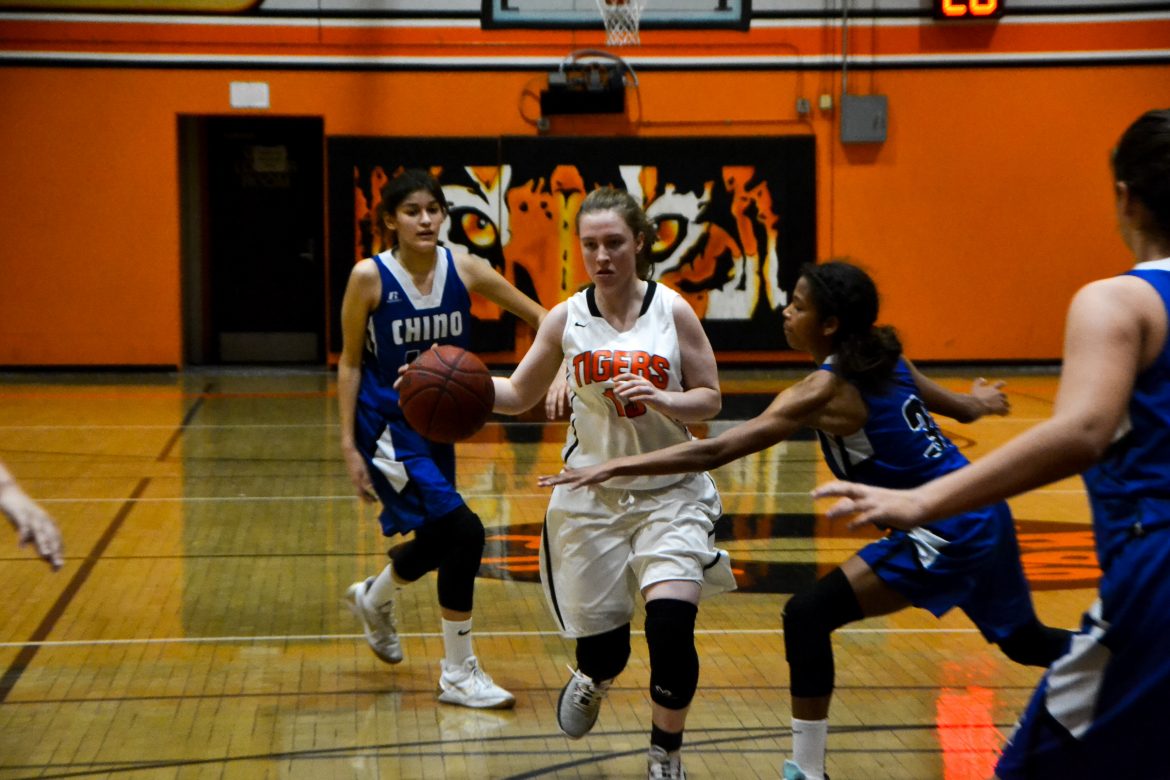 Girls’ basketball performed a miracle on Thursday, February 15th, pulling victory out of the jaws of defeat with an insane 56-53 comeback against Chino. Its triumph is a boost morale and ensures the continuation of the girls’ CIF run.

The game began with a troubled start from the Tigers. Almost instantly after senior Tiffany Holmes tipped the ball off to Chino, the Cowgirls forced the ball down the court a scored in the paint. The Tigers tried to bring the ball to Chino’s side, but they were immediately shut down, leading eventually to a Chino free throw and two more points.

In the first half, it was clear that something was off with the Tigers. Juniors Kayla Zhang and Flannery Clark as well as sophomore Megan Yee were able to put some points on the board, but the team found themselves lacking. Chino, on the other hand, was a well oiled machine. They played aggressively, but not the desperate aggression that the Tigers were used to facing in the Rio Hondo League. They were composed and swift, rarely missing a free throw or three-pointer. The score became more and more unbalanced, and by the end of the first period, the Cowgirls lead 16-8. They had doubled the Tigers’ score. 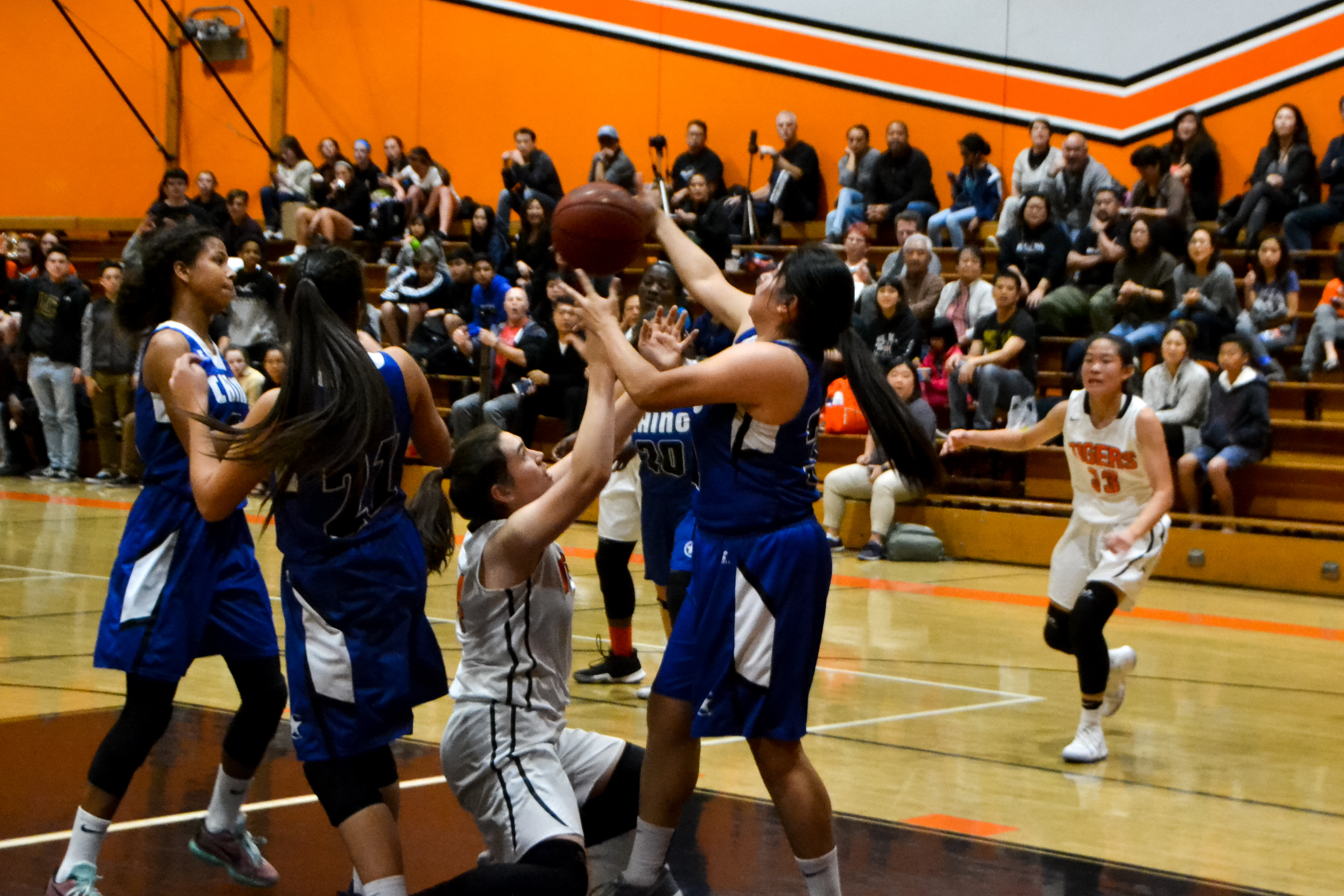 Chino continued their onslaught in the second period, striking swift and hard and racking up points. Junior Lauren Kafkaloff’s rebounded shots and Yee’s continued accuracy kept the Tigers hopeful, but they were struggling to catch their opponent. At the half they were down by ten and after the Cowgirls scored five points in the first minute of the third period, it seemed as if all was lost for the Tigers. There could certainly be no way for the team to come back now.

But then, the impossible happened. Starting with a three-pointer from Clark, South Pasadena began to fight back. Kafkaloff brought the team closer with a layup and Holmes fired in two shots that caused the crowd to go wild. When it came time for the final period of play, the Tigers were only down by six points. Now, the Tigers had their momentum back. Thanks to a free throw from sophomore Charlize Kruzic, the team started off scoring, and three points from Kafkaloff put the team closer to their opponents than they had been since the game started. Chino scored two points in this frenzy, but a pair of three pointers from Yee, who was having the game of her life ensured that the Tigers would trail only by one point. Then, Holmes took the ball and launched it into the basket, taking the lead. As the crowd grew louder and louder, Zhang expanded on the Tiger’s score with a three pointer. 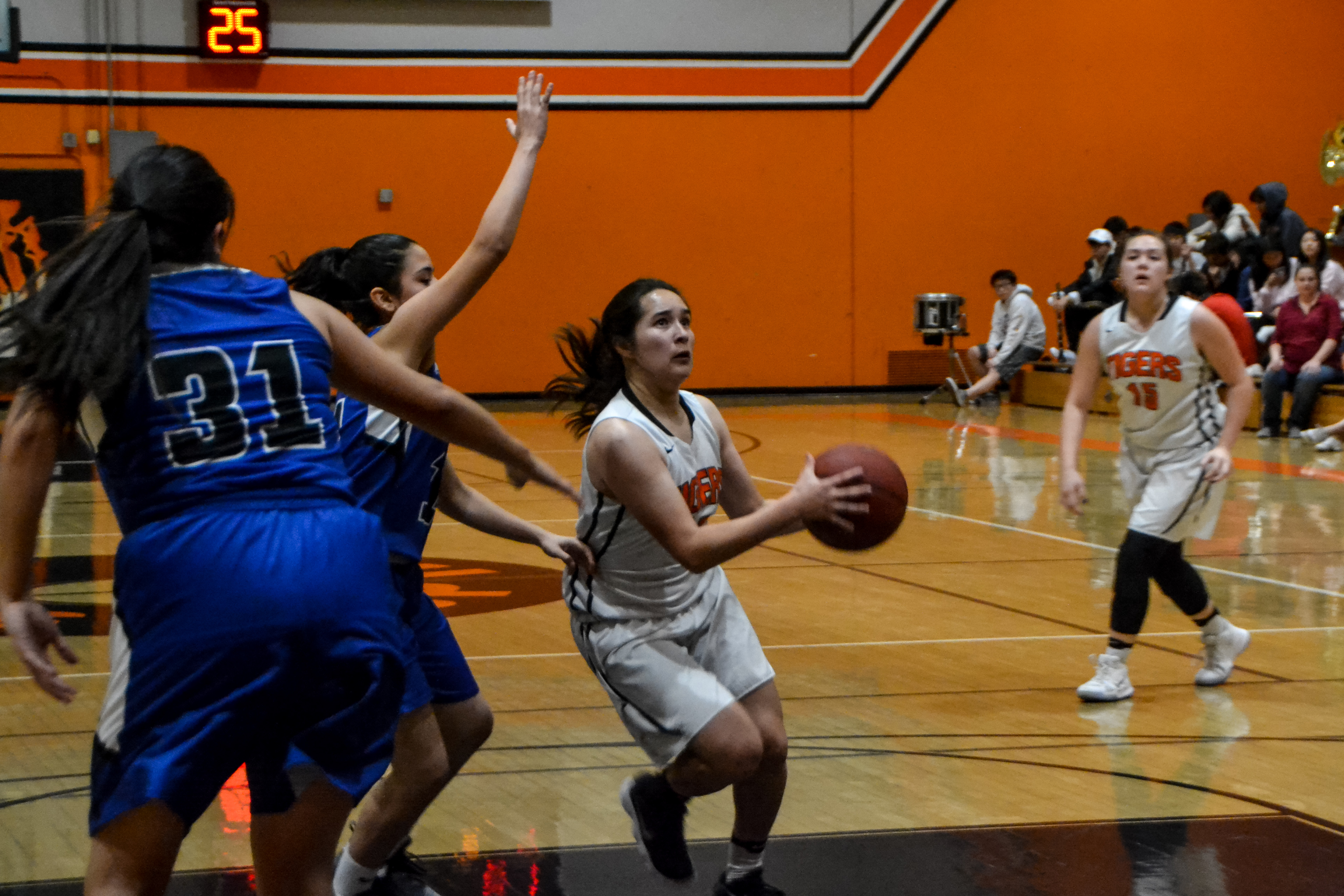 But Chino wasn’t finished yet. The Cowgirls threw off the facade of composed aggression that they had kept for the first part of the game and unleashed a violent and chaotic energy which brought them to double bonus but allowed them to tie the game up 53-53. The game entered its final minute with the tie and it was clear that it could now be anyone’s game. The ball was rushed back and forth across the field in a mad frenzy of passes, and blocks. It seemed for a moment that the game would go into overtime, but then Kafkaloff struck, stealing the ball from the Cowgirls and racing to the other side of the court. As she took her shot, a desperate Cowgirl fouled her, but it was no use. Kafkaloff had sunk the shot and her one free throw shot put the Tigers up by three. Chino knew that they only had one chance to get even and pushed forward with a final burst of power, preparing to shoot a three pointer. But as they readied their shot, Holmes leapt forth and flew through the air, striking the shot down right as the final buzzer went off. Fans and teammates alike stormed the field and cheered with excitement. The Tigers had done it. They had come from behind and taken back the victory.

This means the Tigers will continue their fight through the CIF tournament on Saturday, February 15 against Culver City. The Tigers will be hosting, but due to Bingo will be playing at San Marino High School. With their amazing triumph over Chino, it looks like the Tigers have a shot at more huge victories in the games to come.