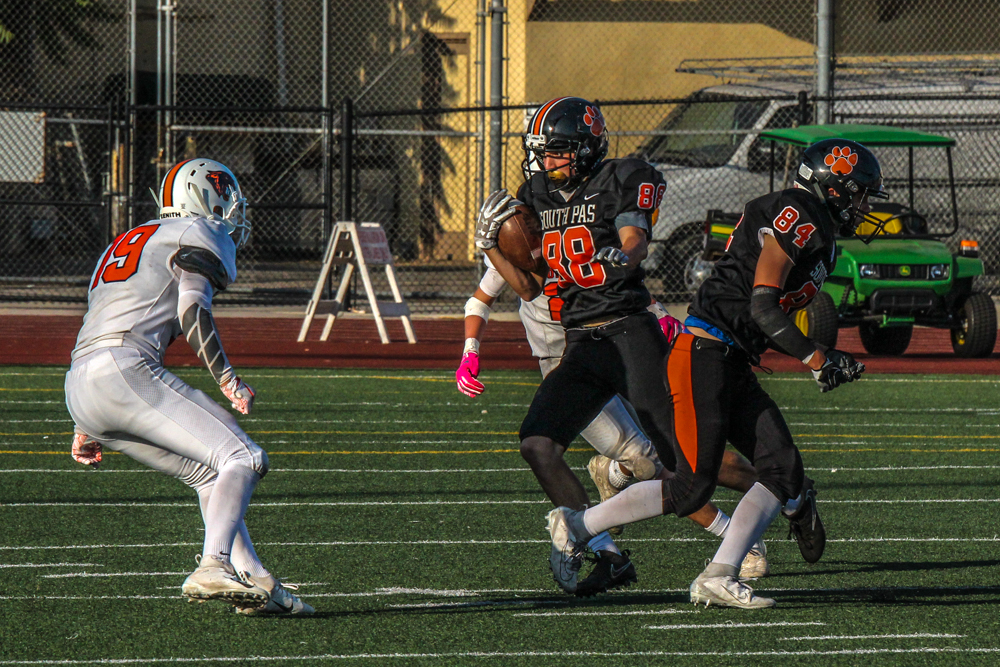 The Tigers have already won more games in the preseason than in any year under head coach Jeff Chi. With an explosive offense that has scored 24 touchdowns in six games, South Pas looks to compete for a Rio Hondo League title this season.

However, South Pas allowed Polytechnic to crawl back into the game. A slew of penalties and open gaps allowed the Panthers to reach the end zone, leaving the score at 14-7 at the end of the first quarter.

Defensive backs Ivan Estrada and Zazriel King, collided with one another on the extra point attempt, leaving Estrada with a limp for the rest of the game. With his star senior unable to cover the Panthers’ primary receiver, Chi gave sophomore cornerback Jack Riffle a chance to exhibit his skills.

South Pas seemed to lose some steam in the second quarter, giving up another touchdown and being unable to score. Riffle prevented the Panthers from gaining a large lead, shutting down opposing receivers and keeping Polytechnic to just a field goal at the end of the half, and the visitors headed into the break with a 17-14 advantage.

The Tigers came out of halftime with renewed energy and focus, while Riffle maintained his stellar play, keeping his receiver on lockdown coverage.

Luna-Long pushed the Tigers into a hurry-up offense, driving 52 yards down the field in two minutes. He connected with Huntley for a 20-yard touchdown and put the Tigers up, 21-17, with five minutes remaining.

Defensively, the Tiger pass rush forced the Panther quarterback to scramble out of the pocket and Sweetman picked off an errant pass. However, Luna-Long threw an interception of his own, gifting Polytechnic the ball at the South Pas 12-yard line the very next possession.

The Tiger defense held strong and Panthers were unable to take advantage of the short field. Polytechnic settled for an easy field goal, cutting the South Pas lead to 21-20.

The next play, the Tigers fumbled and the Panthers recovered, but the South Pas defensive line continued to dominate. The Polytechnic offense was unable to put up any points, as they missed a field goal to give South Pas the ball back at their own 20-yard line.

Offensively, senior running back Ethan Hong gained tough rushing yards, putting the Tigers in position to score. Sweetman caught his second touchdown pass of the day and South Pas led 27-20 with 4:18 left in the game.

The Panthers seemed to lose hope after the Sweetman score. Polytechnic forgot that a snapped ball was live and junior Joshua Cruzata snatched the pigskin out of the hands of a confused Panther wideout.

Luna-Long quickly put the game out of reach, finding Estrada 21 yards down the field for a touchdown and closing the match out, 34-20.

“The team played really well,” Riffle said. “We started to slip up in the first half, but in the second half, we got it together, played our game, and ended up winning.”

The Tigers hopes their preseason success translates into the regular season when they battle San Marino in the league opener next Friday, Oct. 10.