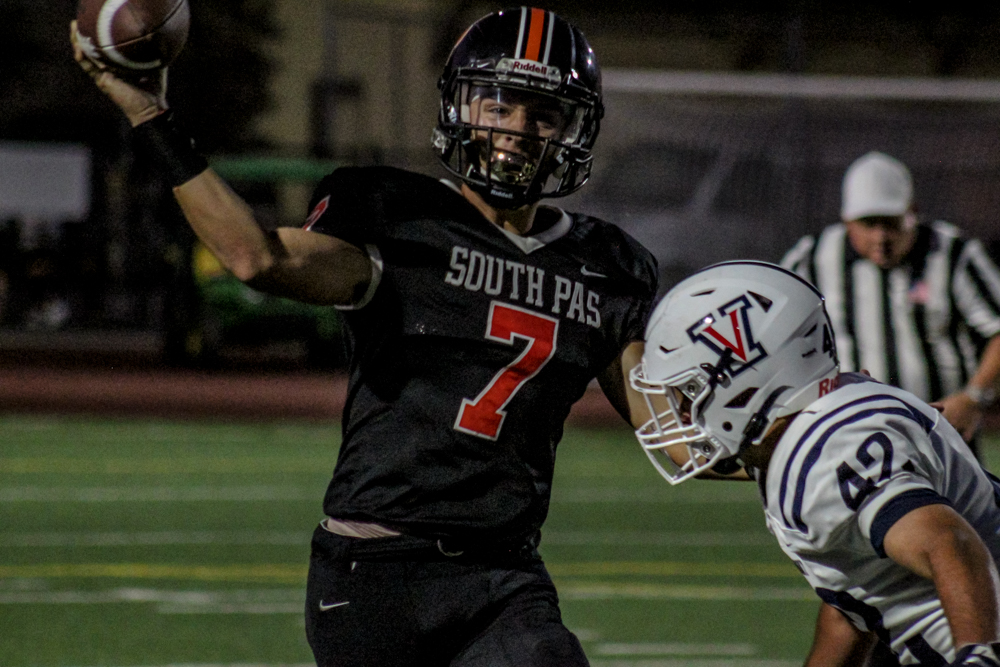 With 177 passing yards, Luna-Long rallied the offense late in the fourth to victory.

The football team pulled off a nail-biting victory, 21-17, against Viewpoint High School in its first home game Friday, Aug. 30. The Tigers fell behind for most of the first three quarters, but mustered up a late comeback led by quarterback Samuel Luna-Long. The visitors completed a last-second Hail Mary attempt, but a holding penalty waived off and South Pas escaped with its second preseason win.

The Patriot offense threatened to score early in the first series, easily pushing the ball down the field. Junior cornerback Zazriel King responded, with two near interceptions and lockdown coverage on the first drive. Offensively, the Tigers were unable to generate a viable ground game against a strong Viewpoint defensive line that stuffed senior fullback Quentin Pithey multiple times. The visitors continued to move the chains and slowly arrived to the red zone. Desperate for a stop, the Tiger defensive line began pressuring the quarterback and smothering the Patriot running game. A powerful pass rush sent the Viewpoint quarterback scrambling and sophomore Grant Huntley intercepted an errant pass at the ten yard line. Huntley navigated through the sea of Patriot defenders and finally ended up out of bounds at the Tiger 30.

With the game still knotted up 0-0, South Pasadena was unable to finish the drive and ultimately had to punt after being merely inches away from a fourth down conversion. The Patriots took over at the South Pas 43 yard line and were met with an aggressive Tiger defense, but still they managed to assemble a string of first downs. The Tigers were unable to compete with Viewpoint’s quick offense and struggled to cover their receivers when putting pressure on the quarterback. The dynamic Patriot quarterback scrambled into the end zone for the first score of the day.

The following Tiger drive was unenthusiastic, allowing a sack that led to a quick punt. With only a handful of minutes left in the half, the Patriot offense moved the chains with hurry-up offense and had the benefit of multiple Tiger penalties, allowing the Patriot quarterback to sneak into the end zone. Senior Ivan Estrada received the ball in a 14-0 deficit and answered accordingly. Catching a quick toss from Luna-Long, Estrada flew past the Viewpoint defenders for a 59-yard touchdown reception, ending the quarter with the Tigers down, 14-7.

The Tigers received the ball after returning from the break, and despite a few spirited plays, they were forced to punt. Defensively, South Pas provided more resistance and halted the Patriot offense, forcing them to settle for a field goal. In the next series, powerful running by senior backs Ethan Hong and Pithey brought the ball to the Patriot 24 on 4th down. With solid pass protection, Luna-Long threw a perfectly placed touchdown pass to Estrada against suffocating coverage, bringing the scoreboard to 17-14.

In the fourth quarter, the Patriot offense committed an onslaught of penalties and punted yet again. After receiving the punt, the Tigers were back in possession with 8:00 left to go. It seemed like the Tigers were losing momentum after Luna-Long threw several close incomplete passes. Luna-Long completed a 30-yard pass to Stride, but the play was negated by a Tiger holding call. With the clock running down and Viewpoint with possession, the home crowd had grown silent. The Patriots attempted to let the clock run out, but failed after Tigers repeatedly forced them out of bounds. South Pas received the ball with 4:58 left in the game and Luna-Long threw a string of screen passes to Stride and Huntley, putting the team in position to score. At the two yard line, Luna-Long handed off to Pithey, who hammered the ball into the end zone.

The Patriots, down 21-17, quickly drove down to the South Pas 25 with five seconds remaining. Anxious, the Tigers played too aggressively on the Patriot quarterback. He launched a touchdown pass to a receiver in open coverage. However, another holding penalty on the Patriots was called, giving the Tigers a 21-17 victory.

“We fought through all of the negative penalties through the game and we worked as a team,” Luna-Long said. “We drove down the field, and we got the win.”

The Tigers will face off against Eastside High School next Friday, Sep. 6 in an away game.