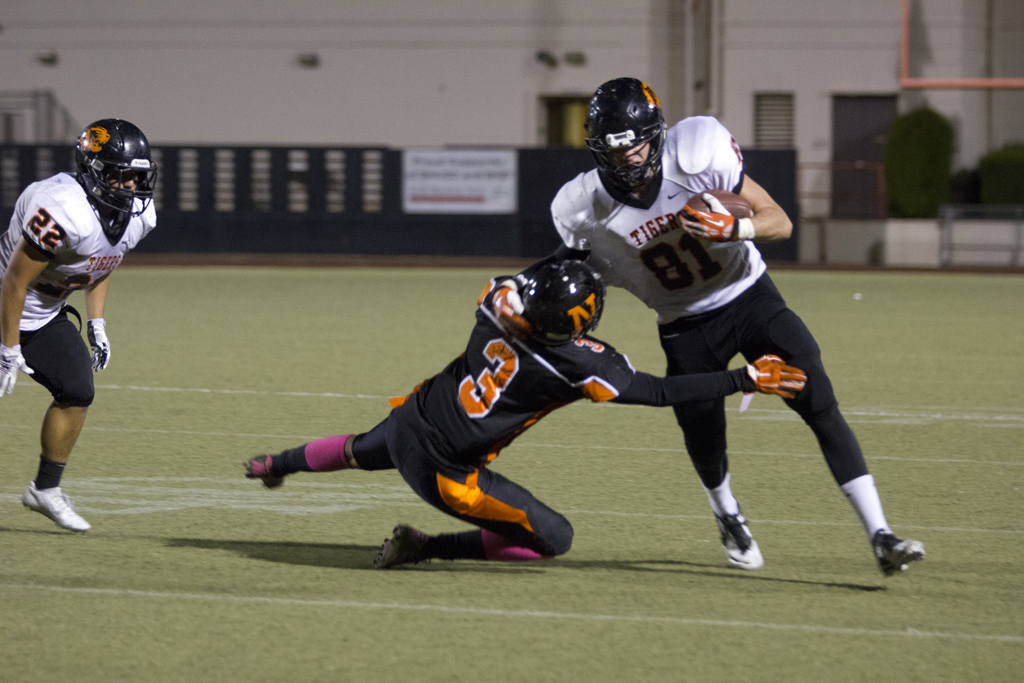 Under the bright lights of Beverly Hills High School, South Pasadena football proved their 3-1 record to be no fluke. Going into the game, the Tigers had won three straight games, and were hungry for a fourth. The Normans, on the other end of the field, were looking to defend their home turf in a critical Thursday night matchup. In the end, it was the Tigers who were victorious, having outplayed the Normans in every aspect of the game.

The Tigers’ defense was solid throughout the game, holding the Normans to only nine points

As the game began, South Pas’ defense, who have been feasting on opposing offenses throughout the season, was looking to make yet another statement. This would be postponed, however, as the Normans quickly marched down the field, completing a field goal in the red zone to go up 3-0. Tiger defenders, already flustered, came back to the sideline determined to show the Normans who they really were. The Tigers’ offense answered right back, driving down the field with intensity. Seniors Alton Phillips and Ernesto Jauregui helped the Tigers’ cause with two explosive runs.

“We mixed up the plays very well today,” junior wide receiver Max Luck said. “We ran the ball inside and out. We passed well and did really well on our screen plays. Defense really stepped up as well.”

As South Pas approached the red zone, a late hit on junior wide receiver Emiliano Sornoso prompted a penalty flag and a confrontation with Phillips, who wasn’t happy with the Norman’s play. The drive ended with a one-yard quarterback keeper by junior Michael Partida. On the ensuing kickoff, sophomore Jalen Ross came barreling into the kick receiver, forcing an immediate fumble which was recovered by the Tigers.

Both teams line up, ready for the snap. The Tigers dominated the trenches all game.

Runningback Matt Ayala busted numerous tackles to start off the second quarter, bringing the Tigers down to the one-yard line. Phillips then punched the ball in for their second touchdown, and the scoreboard now read 13-3. The Tigers’ defense was back to its’ usual self, making plays all over the field. Ross had another colossal hit to keep the ball carrier from reaching the first down marker, and the defense as a whole was producing an absurd amount of tackles for losses.

“The coaches have been great,” Luck said. “They point out our flaws and help us improve them. They set the game plan, and the team listens. They coach, we play. I think they’ve been a key component for our record.”

The peak of the defense’s play came in the middle of the second quarter, when Ayala, who was in at linebacker, bobbled and intercepted an errant Norman pass. Along with a convoy of Tigers, Ayala housed the pick for six. The tension between the two teams continued, as the Tigers were penalized for taunting after the extra point, which was not met well with the South Pasadena coaches.

Ayala carries the ball downfield. He would go on to score three touchdowns.

This wouldn’t stop the Tigers’ momentum at all. After forcing a turnover on downs, the Tigers lobbed a 40-yard completion to Sornoso. On the very next play, Luck hauled in a great 25-yard touchdown snag to put the Tigers up 27-3. The Normans were down but not out. On their following drive, a Beverly Hills ball carrier broke out a tackle-busting 70-yard carry for a score, their first taste of the end zone that night. With 1:29 left in the half, the Tigers were looking to complete a last-minute drive to extend their lead. This wouldn’t come to fruition, however, as a Partida pass was intercepted on the one-yard line, bringing the half to an end, South Pasadena on top 27-9.

“It’s great to have the opportunity for the subs to play,” Luck said. “They push the starters in practice and make the team better. We never know when we will need them to play and they really stepped up today.”

After Jauregui opened up the second half with an electrifying return to set the Tigers up with great field position, possession between the two teams bounced back and forth. Ayala was the first to break the silence, as he burst his way through multiple Norman tacklers for a great touchdown. A designed two-point conversion fake field goal put the Tigers up 35-9.

Gabler carries the ball past a Norman defender. He was a dominant presence on both sides of the ball.

As the Normans took over on offense, Ayala was still electric from his play on offense, and rocketed around the field to make plays. After a Beverly Hills player fumbled, Ayala stayed aware, picked up the football, and took it to the house again, his third touchdown of the day. Despite the 42-9 score, the defense continued to make exhilarating plays, mainly Ross’ thundering hits and junior linebacker Jeremy Gabler’s forced fumble. Tiger subs were put in to get some reps, and the clock slowly dwindled down to zero, South Pasadena on top 42-9.

“[For next game,] we still need to improve.” Luck said. “We need to fix our blocking errors and refine our plays, the usual preparation.”

The Tigers advance to a superb 4-1 record, and are looking to extend that to 5-1 next Friday at home vs. Blair.

Golf impresses despite a split team