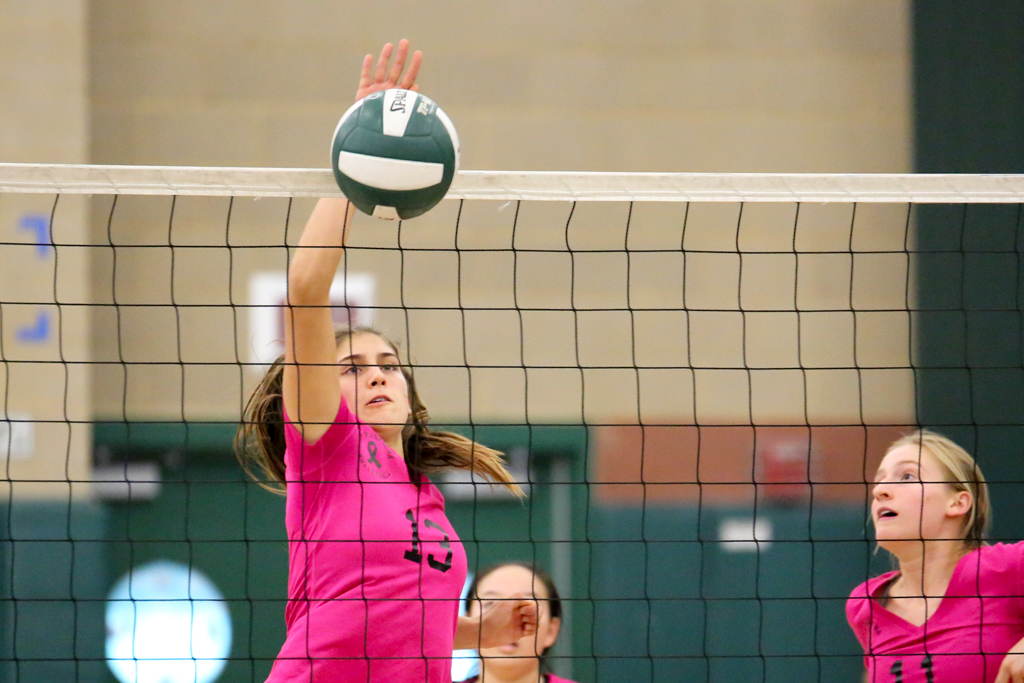 With the graduation of many seniors, South Pasadena athletic programs have been left afflicted by the departure of numerous key players. As the fall season approaches, Tiger has ranked the varying degree of loss from these teams, with squads ranked from lowest to highest talent depletion.

Sophomore Sarah Uriarte keeps her focus on the finish line as she sprints the last few yards of her first league race of the year.

Girl’s Cross Country – Although the graduation of Katherine Conte has created an opening on the team, girls’ cross country is extremely experienced with a deep, talent-filled roster. Likely replacements include junior Maÿlis Whetsel and promising freshman Brooke Robinson. Having run a 19:27 three-mile time trial, Robinson has incredible potential and could compete for one of the top varsity spots. Seniors Bailey Wu and Maddy Engelsman have cemented their position on the varsity squad and should also be at the forefront of the team. Juniors Lindsey Calva and Elizabeth Bock will solidify the team’s core, with senior Caroline Liu, junior Sarah Uriarte, and sophomore Amber Gonzalez-Pacheco contending for the final slot. With 5:45 a.m. practices consuming their weekday mornings throughout the summer, these seasoned athletes are primed and hungry to compete for the league title.

Freshman Teryn Kum hits the approach shot and moves up to the net to finish the point.

Girl’s Tennis – With nine of 12 players returning from last year’s varsity team, new coach Sean Taroli will have significant talent at his disposal. Despite retaining significant talent, the graduation of high position seniors, Ashley Huang and Jessica Chang, leaves big shoes to fill for junior Shannon Huang and senior Molly Round. The last graduating senior, Anya Nicolaides, was one of the top five players, consistently impacting the scoresheet with her performance. In addition to their skill, the trio of graduates were adept at running the team and supporting teammates. This clubhouse presence proved valuable without a designated team captain and a midseason coaching change. Despite the loss of the three talented seniors, the possible return of nine varsity players should provide a solid foundation from which the squad can achieve a CIF berth.

Neck in neck with a runner from Monrovia High School, Clark pushes hard to step ahead of his competitor.

Boys’ Cross Country – The boys’ cross country team lost four of seven varsity runners, including the high-flying Kieran Press-Reynolds. Press-Reynolds often outpaced his opponents by large margins, frequently taking an early lead and maintaining it throughout races. Another notable loss is last year’s team captain, Jaehyung Choi, who ran in the third spot and lead the team with an enthusiastic, unwavering spirit. The team will also be without significant runners Wayne Monical and Robert Steele, both of whom cracked the top eight at league finals. This year, the team will be lead by senior captain Oliver Chang, an outstanding runner and often second-place finisher to Press-Reynolds, as well as returning varsity junior Alekz Grijalva, who finished alongside Choi when healthy. Despite the loss of four teammates, the boy’s varsity team is still running strong and expects to continue its dominance of the Rio Hondo League and compete at CIF finals.

Girls’ Golf – Winning is second nature for girls’ golf, which took home their ninth consecutive league title last season. The Tigers look to extend their reign this year, but notable graduates Caitlyn Yamashita, Emily Swanson, and Clara Wong will be sorely missed as both leaders and starters. Yamashita had drove, chipped, and putted her way to the top slot on the team. Holding their own on the course, Swanson and Wong were also consistent contributors to the team. Despite losing these three important players, girls’ golf has a skilled and deep lineup and should remain dominant. Senior Bethany Chen, who holds the school record for the lowest score during league, will return as a captain and prominent member of the team. Sophomores Victoria Tskviti and Lindsey Biggar as well as senior captain Nicole Srisutham are other experienced returners and will be expected to play significant roles this season. The team will receive a boost from incoming freshmen Katherine Anthony and Christine Mao, and sophomore Tiffany Mai. With talent spread throughout the lineup, another league title seems inevitable for this hardworking team.

Boys’ Water Polo – Eight of the 15 varsity boys’ water polo players graduated from SPHS in 2017, including captains Leo Sonner and DJ Meyer. In addition to shouldering responsibility as leaders, Sonner and Meyer were explosive on offense and gritty on defense, making them tough to replace. Spencer Gurley and Cameron Benitez are other key losses on the team, and often came through in the clutch. Returning varsity seniors Andres Limon and Jasper Lee as well as sophomore Evan Kowal should help to fill this void. Goalie Robert Decker is another notable graduate, who will be replaced by the likes of juniors Eamonn Gibson and Uday Sidhu. Despite losing over half of last year’s varsity team, boys’ water polo is pushing hard for a CIF berth over rival Rio Hondo opponents Temple City and La Cañada.

Girls’ Volleyball – Attending Florida International University this fall to play Division I volleyball, Molly Feldmeth will be a tough replacement for the Tigers. Acting as the main offensive weapon, she hit several strong kills and countless well-positioned sets per game. The other captain from last year, Maddy Hirano, complemented Feldmeth as a libero (defensive specialist), digging out opponents’ smashes and often keeping rallies alive. Ariana Woodworth and Kate Kutzer are other notable alumni, adding several digs and kills of their own every game. Amelia DeYoung and Megan Wong round out the six 2017 graduates from girls’ volleyball. With 12 players on the team, it will be up to returning varsity seniors Maddie Saito and Harper Fox to deliver an even more explosive offensive punch than last season, while also contributing on the defensive end. Returning junior Kim Brown is another significant member who will bear more responsibility.

Football – After the departure of C.B. Richards, new head coach Jeff Chi is getting his athletes ready to compete for a third consecutive CIF berth. However, the Tigers will have to do so without last year’s Rio Hondo League offensive MVP, wide receiver and running back Jalen Ross, and RHL defensive MVP, linebacker Ben Quirk. The team will also lose those players’ efforts on the other sides of the ball, as Ross was also a defensive back and Quirk a tight end. Another tough loss will be captain and quarterback Adam Arellano, who was awarded Second Team All-League by the RHL last year. In total, football lost eight of their 13 RHL awardees and four of the five starting offensive lineman. Look for seniors Sidney Luna-Long, who will move from wide receiver to quarterback, and Jackson Totleben, who will take over the starting running back role, to play a more prominent role on the offensive side of the ball and emerge as team leaders.

Why is big p not mentioned for returning talent for cross country. He is very talented and not only on the track :)