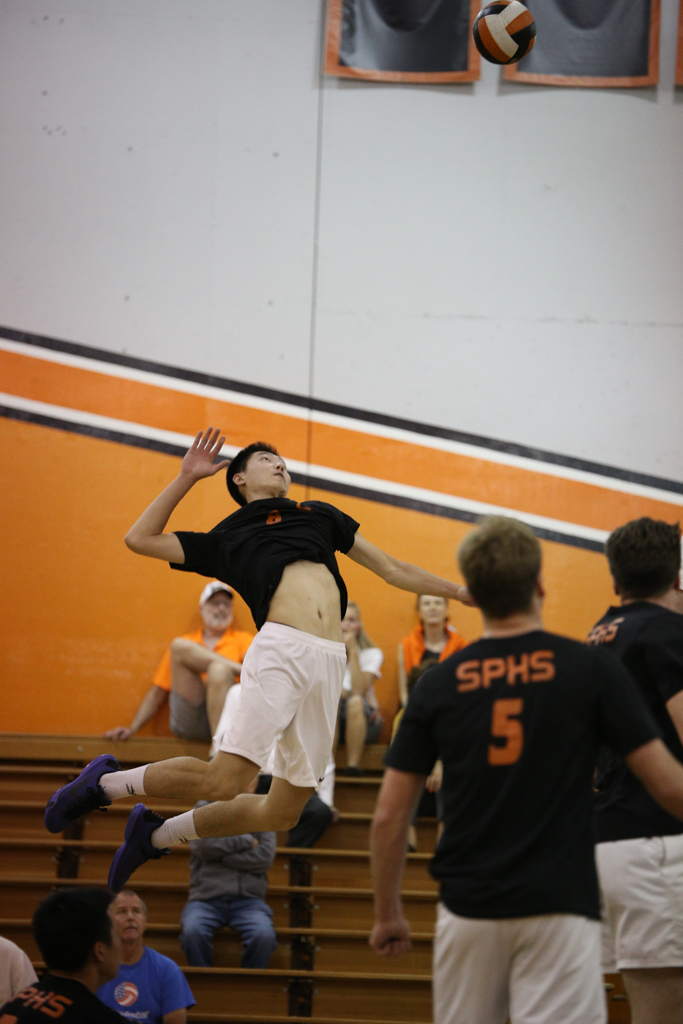 The boys’ volleyball team is on pace for an undefeated home record after beating the Saddleback Valley Christian Warriors today in four sets, 25-19, 25-20, 27-29, 25-19. The win puts the Tigers at a dominant 18-1-1 overall record. The Tigers played with high levels of intensity and energy throughout the non-league match against the Warrior team, eventually etching out the victory.

South Pas set out to make a strong statement right from its first play of the game. Junior Greg Luck stuffed a Warrior kill attempt with an impressive block and earned the Tigers their first point of the set. Defense was key, especially against the visiting Warriors, who showcased fierce offensive firepower from talented outside hitters. However, the Tigers held the vigorous Warriors at bay, and played the game exactly how they wanted to with junior defensive specialist Scott Kawakami returning after missing two games. Kawakami’s return sparked South Pas’ efforts in digging the Warriors’ hard spikes, which gave them more chances for kill attempts. South Pasadena started to pull away to a considerable 19-9 lead toward the end of the first set after good blocking slowed the Warriors’ offensive game and sparked the Tigers’ own offensive game. However, Saddleback Valley would not back down right away, and the Warriors started to make a run near the closing points of the first set, scoring easy points from Tiger mistakes in serve returns. South Pas then picked its game back up to finish out the set 25-19, after allowing a 10-6 run.

The flow of the second set was similar to that of the first set as the Tigers carried over the momentum gained from their opening period victory. Great serving and hitting allowed the home team to establish an edge once again. Luck and senior Richard Yu consistently blocked Warrior kill attempts and successfully landed kills of their own to score for the Tigers, while Kawakami got himself numerous aces by strategically placing the volleyball on difficult positions for the opposing team to receive and return. Such offensive outing allowed the Tigers to hold on to a slight advantage all the way until the final point which gave South Pas the second set victory with 25-20.

The visiting team, looking to avoid the embarrassment of dropping all three sets to hand another sweep to the Tigers, entered the third set with a different mentality. Both teams participated in an intense matchup, going back and forth throughout the set to keep the score tight. However, South Pas started to make mental errors down the stretch, hitting the ball too hard outside the boundary line and lost their edge. In the meantime, the Warriors’ confidence rose when their swing plays from the outside hitters began to click, forcing South Pasadena into difficult situations on defense. South Pas attempted to complete a final comeback push, extending the set over 25 points, but the Tigers’ efforts weren’t enough to prevent a 29-27 set loss.

Set to bounce back from the close third set loss, South Pas directed its full focus towards capturing the final set. While the Warriors seemed to play with lack of enthusiasm and extreme fatigue after the prolonged third set, the deep Tiger team was eager to hand Saddleback Mountain a loss in the fourth set and ultimately the game. South Pas established an early 8-3 lead and never looked back. Even though the Warriors were able to make small runs to inch closer for a comeback, the Tigers did not panic to keep poise to play their game. The Tigers came out with a 25-19 victory to drop the Warriors in four sets.

South Pas looks to rise to a formidable 19-1-1 overall record and 4-0 league record with the home league game win against the Gabrielino Bald Eagles this Thursday, April 16.

Softball grounds out to Monrovia in 15-4 loss