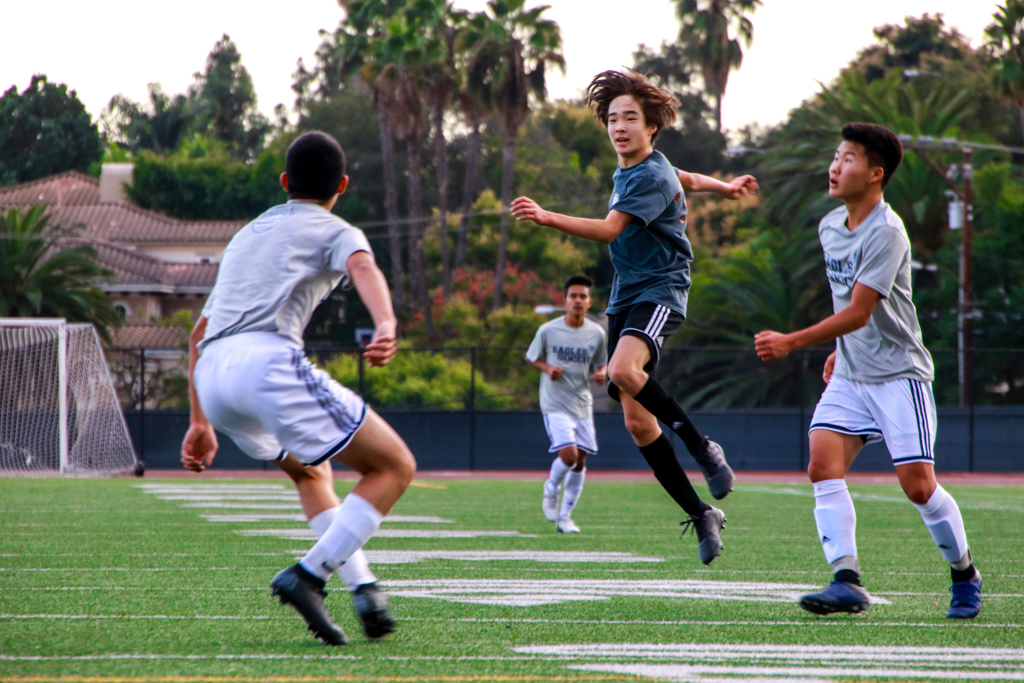 Just as in their other preseason games, the Tigers have been unable to finish their chances and grab a victory.

Boys varsity soccer tied 1-1 against the Flintridge Prep Rebels on Tuesday, Dec. 10, in its home opener. The Tigers now sit at a 2-2-1 preseason record.

Throughout the match, the teams jostled back and forth for possession of the ball. Flintridge Prep and South Pas scored within minutes of each other in the first half, but erratic shots and solid goalkeeping kept the score 1-1 for the majority of the match.

The Rebels maintained strong communication between midfielders, which let them possess the ball for longer. Junior striker Caleb Lee had a few opportunities to control the ball in the Flintridge Prep third, but they amounted to nothing.

Flintridge Prep upped its offense, was able to maneuver the ball around the Tigers, and eventually netted the opening goal. However, South Pas reacted quickly and Lee knocked a header into the net, tying the match at 1-1.

In the second half, the game slowed down. Both teams took their time, passing back and forth and methodically searching for gaps in the opposing defense. Sophomore Chad Noueihed controlled the middle of the pitch with his quick feet, responsible for many of the Tiger touches.

Towards the end of the second half, both teams were on edge, hoping to score the tie-breaking goal. The Rebels seemed destined to gain the lead, but junior defender Porter Calva’s quick reflexes maintained the tie and deflected an incoming shot.

Both teams almost scored, but neither were clinical in front of goal, allowing for simple saves for the keepers.

“We played a better, harder game. During the game, we played the ball around smoothly and created chances well. Our team wasn’t expected to win this matchup against Flintridge, so the result was well fought. Towards the end, we had the momentum but couldn’t finish our chances. In my opinion, we should’ve won, but as a team, I’m happy with our performance,” junior co-captain Reo Snyder said.

The Tigers will battle the Canyon Cowboys on Thursday, Dec. 12.