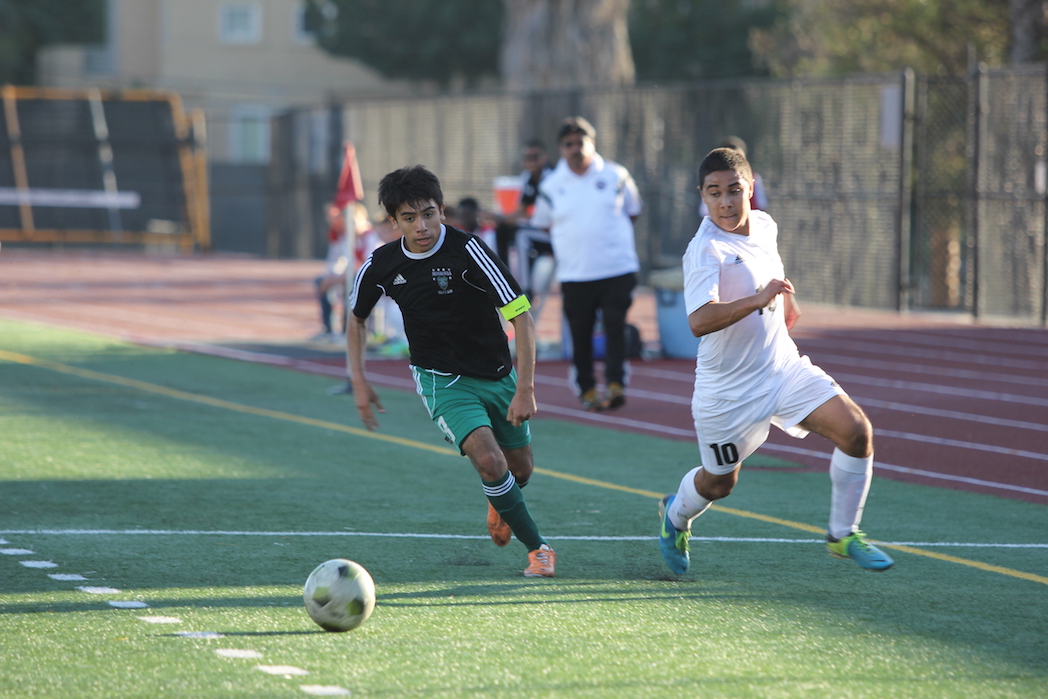 A repeat of the boys’ soccer team’s last-minute victory over Monrovia couldn’t be completed on Tuesday, February 10, when the two teams tied 1-1 in their second match-up of the year. In front of their biggest crowd of the season, the Tigers couldn’t net a last minute game-winner despite numerous chances in the Wildcat box. Going into the game, South Pas and Monrovia were tied in he first place position. The tie keeps the Tigers in first place, a shared position with Monrovia. South Pas will be looking to break that tie with a win over San Marino Thursday, February 12.

Neither offense came out particularly aggressive in the beginning of the game, and there were not many chances for either team. South Pas found its footing first, and started moving the ball towards Monrovia’s goal. The Tigers set multiple runs up for each other, none of which were promising, and the Wildcats responded. A quick momentum shift changed the game and Monrovia was now on the attack. A missed Wildcat free kick gave the Tiger crowd an early scare, but Monrovia wasn’t done there. From just inside the box, a Wildcat chip shot made its way over goalie Sam Hoadley-Brill‘s outstretched arms and into the Tigers; goal, giving Monrovia an early 1-0 lead.

With 20 minutes left in the first half, the Tigers had plenty of time to equalize. Senior Jordan Jackmon realized this and immediately led the Tigers on the counter-attack. He and senior Ramon Gutierrez worked well together deep in Monrovia territory, but couldn’t find an opportunity to score. Gutierrez set Jackmon up in the box, but the Wildcat defense limited his shot, which missed left. Senior Tim Wong had a relatively deep shot on goal, but it was blocked by the Monrovia goalkeeper. Jackmon and Gutierrez had another back and forth in the Wildcat’s territory, but the Monrovia defense closed in at the last minute, denying the two Tigers of a shot. Junior Oskar Hernandez set Jackmon up again, who set the ball up for junior James Tulin. Tulin’s shot missed wide right after the Wildcat defense took away the open angle. South Pas kept the attack up, and Gutierrez had a chance on a rebounded ball that bounced off the goalkeeper’s hands. The ball had traveled too far from the goal, however, and Gutierrez’s shot missed just outside the crossbar.

With the clock winding down, the Tigers were putting all their effort into scoring before halftime. Jackmon and Gutierrez connected perfectly with a beautiful back and forth to set up Tulin from about five yards out, but he couldn’t handle the put and the Wildcat goalie pounced on the ball. At this point, there was under a minute left. The Tigers were given a free kick from about 40 yards out, and senior Oscar Jaime III was the kicker, as he usually is. With 15 seconds left on the clock, Jaime rocketed the ball towards the Monrovia net, where it was met by Wildcat defender Alfredo Maciel. Maciel couldn’t handle the sheer power of Jaime’s kick and the ball bounced off of his body and into the net, tying the game up at the half.

The Tigers started the second half off with the same aggressiveness that they had been playing with at the end of the first. Jackmon and Gutierrez both had shots that were blocked, and the Tigers were inching closer and closer to another goal. Ball control was on point for the Tigers, and chances were plentiful. Jackmon had a promising breakaway, set up by his blazing speed. He initially got the ball past the goalie, and pushed the ball towards the goal with the last bit of balance he had left. Just before the ball crossed the goal line, a Wildcat defender came flying in and saved the goal. This close call got to the heads of some Wildcat players, and one was given a yellow card for an aggressive tackle.

The Wildcats came back with some weak retaliation that was easily handled by the Tiger defense, which gave the South Pas forwards some more opportunities. Tulin had a close shot that turned into a Tiger corner, but nothing was made out of it. Soon after, Monrovia was given another yellow for a blatant flop in South Pas’ box. Possession ping-ponged back and forth for each team, and junior James Anderson was given a yellow in the process. On the Tigers’ possessions, they got closer and closer to taking the lead, but nothing was going in the net. Monrovia’s closest chance came when a Wildcat through ball found its way to a forward who was behind the Tiger defense, but Hoadley-Brill came flying out of his goal and blocked the players’ shot from just feet away. Both teams continued to have chances in the box, but neither could net the game-winning goal. Turnovers and bad shots were killing the Tigers’ chances for a win, and they couldn’t find a way to score again by the end of the game. The final score was 1-1.