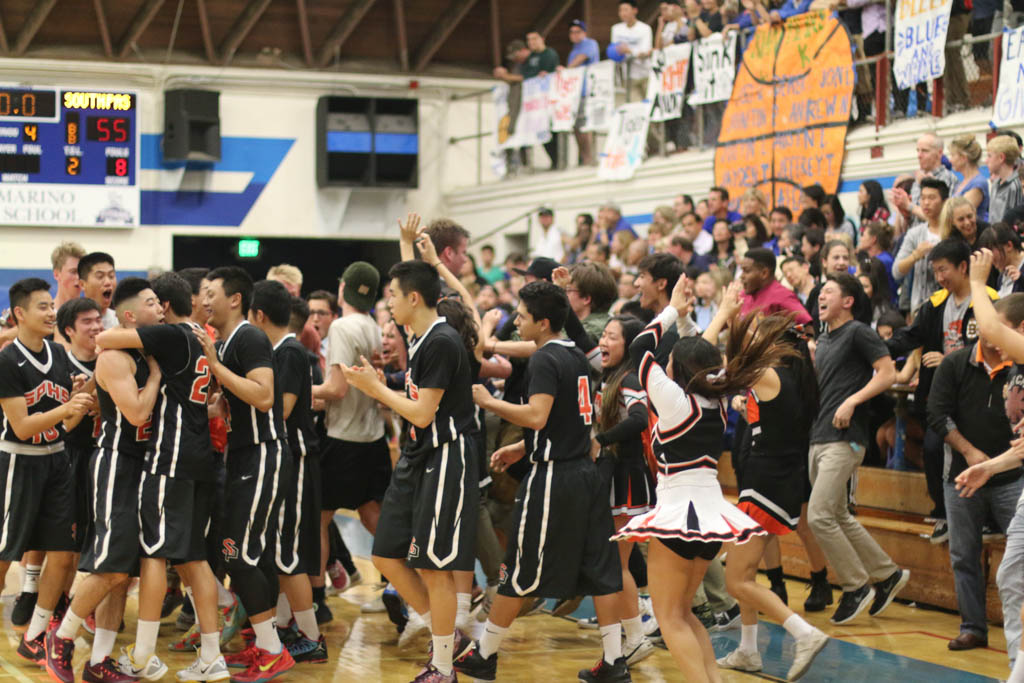 The South Pasadena Tigers were in a must-win situation after defeating Monrovia during Tuesday’s match up. Standing at a 7-2 record, and with La Cañada 8-2, South Pas needed a win at the San Marino gym in order to tie with the Spartans and earn the Rio Hondo League title. The Tigers did just that, topping the San Marino Titans 55-46 at their home court, sharing the first place spot in league.

Hype and energy toward the match were evidently high as emotions from both teams’ fans flowed throughout every single possession of the game with loud cheers and chants. San Marino got the home crowd on its feet by marking first blood of the game with a three pointer. However, South Pas junior Raymond Arismendez answered right back with two straight three pointers to silence the Titans. South Pas and San Marino showcased strong offensive and defensive efforts to open up the first quarter and keep the score relatively even at 14-11 heading into the second quarter.

The Tigers looked to expand upon their three point lead in the second quarter, but the Titan pressure on the South Pas offense forced a turnover, giving San Marino for more chances at the basket. The flow of the game during the second quarter seemed as if South Pasadena was to give up the lead until junior Max Luck hit an unexpected corner three pointer to regroup the Tiger offense and fire up the visiting South Pasadena crowd. With this play, Tigers headed to intermission at the end of the first half with big smiles from the players and the supporters, despite the fact that San Marino outscored South Pasadena 15-14 to set the halftime score at 28-26 with the Tigers in the lead.

With the scoreboard showing an intensely close battle for the win, the two teams went head to head throughout the third quarter in an attempt to make a significant run to build a comfortable edge heading into crunch time. South Pasadena experienced another scare of losing the edge to San Marino late in the third quarter as senior Titan guard Brian Low completed a 4-point play to explode the home crowd into a frenzy. The Tigers’ respectable seven point lead was cut down to three at 37-34 instantly with the play. Senior Christian Lee responded with a two point jumper to send the Tigers to the last quarter, 39-35.

Enthusiasm from supporters notably grew at the start of the important closing period. Players were battling fiercely, especially on the defensive end, as both teams struggled to convert field goals. Fouls were common and free throw shooting was crucial; Luck provided breathing room by sinking three straight free throws. The clock was ticking closer to the end of regulation play and junior Greg Luck’s pivotal three-pointer forced the Titans to rush their shots in attempting to make quick baskets for a comeback. By securing the defensive rebounds in the last two minutes, to deny San Marino of second chance points and hope of ever making a late game surge, the South Pasadena Tigers finished out the fourth quarter 16-11 and the game 55-46. Supporters of the Tigers rushed the Titan court to celebrate the championship title with the players.

“We are extremely happy to give the fans what they wanted,” senior point guard Joey Toyama said. “The fans’ support throughout the game was amazing and that was what got us going for the win. They truly represented South Pas.”

The boys’ varsity basketball team now aspires to reach beyond attaining first place in league and looks forward to making a deep CIF playoff run. Even though South Pasadena and La Cañada have the same league record, the Tigers won the coin toss and are now the Rio Hondo League’s 1st seed going into the playoffs.