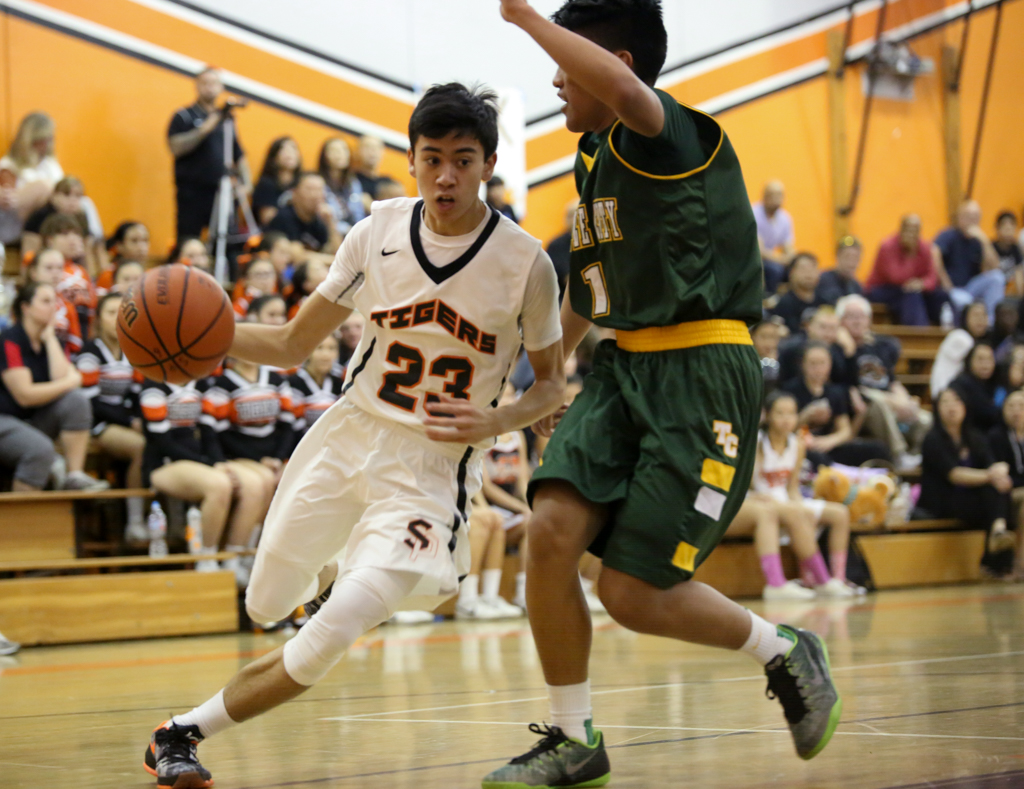 Temple City scored the first points of the game until a clock malfunction forced the game to be briefly delayed. After resetting the shot clock, Arismendez caught the Rams off-guard after tipping a pass for an easy layup. Temple City fired back with a 5-0 run over the Tigers until Scholtz scored two points, followed by a putback two pointer by Sandoval for a 9-6 score. Temple City and South Pas both exchanged points on the board to stay in the game. The Rams flexibility on the court forced the smaller Tigers to tightly guard Temple City, only to be mismatched in the key against the bigger Rams players. South Pas kept the game close with superb shooting from Arismendez that allowed the Tigers a one point lead at 16-15 after the first quarter.

Nakagawa scored his first three pointer of the game to keep the Tiger momentum high heading into the second quarter. Temple City responded with lockdown man-to-man defense which forced South Pas turnovers. After struggling on offense, Fox scored two three pointers to keep the Tigers in the game. The Rams led the Tigers at halftime by a score of 29-26.

Coming out of the locker room, South Pas showed no lack of intensity as Arismendez knocked down a three pointer and Fox scored two points inside the post the next possession. Temple City returned to the lead with shooting beyond the three point arc and erased the Tiger’s momentum.  Arismendez answered three straight shots beyond the arc to keep the score close for South Pas. For most of the second half, the Tigers trailed by a deficit of five points or less, but couldn’t seem to take the lead over the Rams. Nakagawa tied the game up after being fouled on a layup for a third quarter final score of 47-47.

At the start of the final period, Temple City used its height advantage over South Pas for a 6-0 run inside the key until Nakagawa rushed a layup. Arismendez once again fired from beyond the arc to close on the lead but it was too few and too late for it to have any impact. The Tigers were forced to foul in the final minute of the game in order to stop the clock and send Temple City to the line to shoot free throws where they increased the lead to seven points. South Pas fired its final jump shot of the game but couldn’t hit the basket and lost with a final score of 64-57.

“We just needed to keep consistently knock shots down and box out [in the end], Fox said. “That’s what the game came down to.”

South Pasadena will face off against Monrovia High School away in the final Rio Hondo League game of the season on Thursday, February 11.