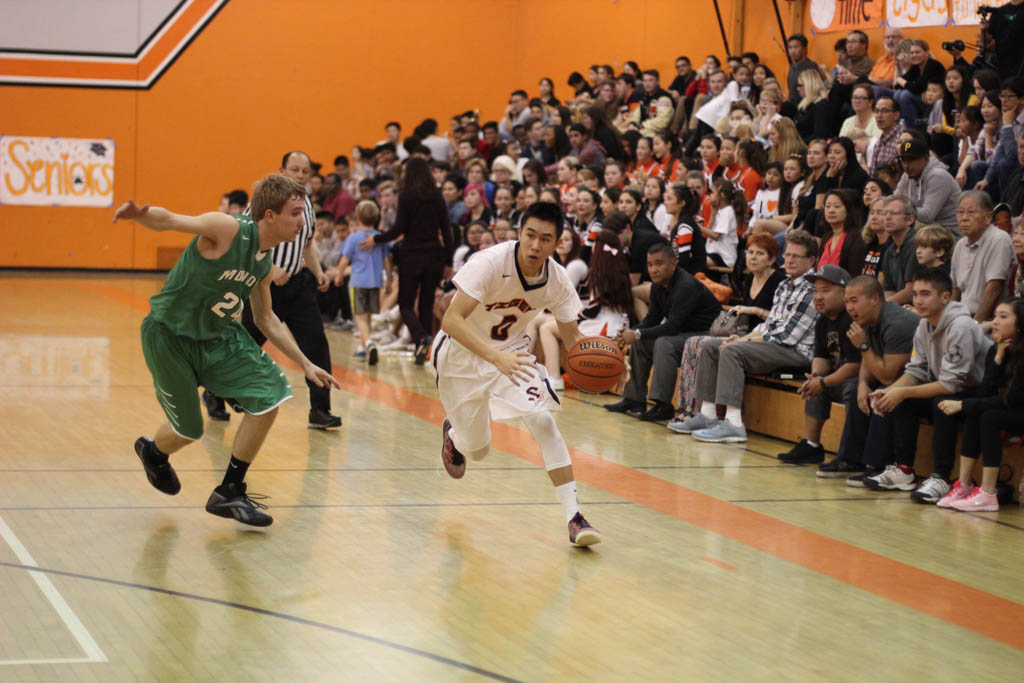 The boys’ varsity basketball team hosted its final home game of the regular season and its Senior Night, starting the game out with seniors Joey Toyama, Christian Lee, Darren Tom, Brian Faung, and Kyle Shinmoto as starters. Unfortunately, the sixth senior of the team Kelvin Mirhan could not step in the court due to a back injury.The Tigers nonetheless finished the game in style with a thrilling 62-53 victory against the Monrovia Wildcats to reach an impressive 7-2 league record. The win puts them one game away from the Rio Hondo League title, with one more game left in the season.

Lee opened up the match with a deep three pointer well behind the arc and Toyama followed up with a three pointer of his own to put six points up on the scoreboard in less than a minute. Shortly after the big plays however, South Pasadena’s defensive effort cooled down and allowed the Wildcats to grab numerous offensive rebounds to muster up second chance points. The score was 6-15 in Monrovia’s favor and the Tigers’ coach, Dave Lutzeier called a full minute timeout to regroup with his team. South Pasadena’s approach to the game in both defensive and offensive ends was completely rejuvenated shortly after the break, as the Tigers went on a 10-2 run to come right back at 16-17 with 30 seconds left in the first quarter. Monrovia held the ball for what seemed to be the last possession of the period; however, South Pas forced a turnover with less than five seconds left and got the ball to junior Raymond Arismendez for a buzzer-beating three that sent the home crowd into a frenzy. The Tigers completed a 13-2 run to end the first quarter with this big basket and were ahead by 2 points at 19-17 before the start of the second quarter.

The Tigers’ offensive firepower that capped the first quarter disappeared throughout the entire second quarter. South Pasadena produced a single three point field goal from Lee and two free throws from Toyama, totaling up to a mere 5 points while letting the away team  convert 13. South Pas was down 24-30 at the end of the first half; however, they bounced back with new energy throughout the third quarter. The Tigers showcased a defensive clinic as Tom took charges to force Wildcat offensive fouls and crucial turnovers for more Tiger chances at the basket. Tiger guards also played intense perimeter defense causing Monrovia to frequently step outside the boundary line. South Pas finished the third quarter on a 15-9 run and the score was tied at 39-39 before heading into crunch time.

South Pas and Monrovia began trading basket for basket in the fourth quarter, and the score was relatively close until the Tigers opened up a significant gap and gained momentum from junior Max Luck’s huge block to prevent an easy Wildcat basket in a 2 vs 1 situation, and junior Greg Luck’s three easy baskets that resulted from the team’s hard defensive pressure right under Monrovia’s hoop. As the Tigers established a comfortable 7 point lead with less than a minute to go, Toyama went up to the free throw line for two free throws. The home crowd chanted “MVP” for the star point guard who finished with a game high 20 points to clinch a Tiger 62-53 victory.

The Tigers are looking to be crowned Rio Hondo league champions at an 8-2 record with an away victory in the last regular season game against the San Marino Titans on Thursday 7:00pm.