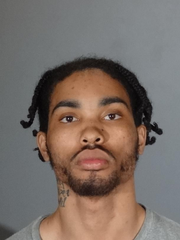 Los Angeles County sheriffs arrested Omar Teriq Bradley, one of the two suspects charged with an attempted robbery and stabbing at Vana Watch and Jewelry, Tuesday, Dec. 18. Bradley and a second unidentified individual conducted a failed robbery at the store on Friday, Dec. 14 and attempted to stab owner Jean Boujekian.

Compton Station deputies located the Chevy Malibu used by the two suspects during the robbery after the South Pasadena Police Department (SPPD) released the description and license plate number of the vehicle. The Compton officers conducted a traffic stop in the area and subsequently detained the driver of the vehicle and Bradley, a 21 year old Compton resident. The SPPD took Bradley into custody and arrested him for attempted second-degree robbery and assault with a deadly weapon, as he wielded brass knuckles during the robbery. Bradley is now in custody at the Alhambra City Jail.

Bradley pleaded not guilty to his charges on Thursday, Dec. 20 at the Alhambra Senior Court. The court set his bail at $95,000 and is facing a maximum of four years in prison if convicted. Bradley will return for a court hearing on Thursday, Jan. 3.

Investigators have not yet located the second suspect who wielded the knife against Boujekian. Individuals with any information regarding the incident or the second suspect’s whereabouts are encouraged to contact SPPD Detectives at (626) 403-7280.